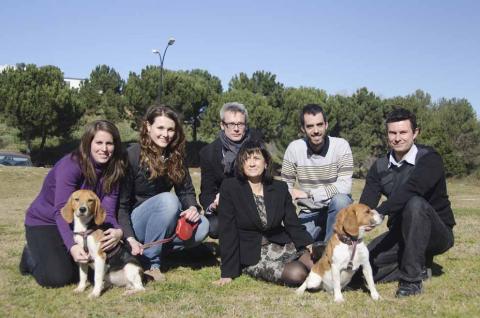 Researchers from the Autonomous University of Barcelona (UAB), led by Dr. Fàtima Bosch, have shown for the first time that it is possible to cure diabetes in large animals with a single session of gene therapy. This is the first time scientists have cured diabetes in large animals, a key step towards applying the therapy in humans. In Catalonia, some 410,000 people have been diagnosed with diabetes. The study was published in the journal Diabetes, the most prestigious in this field.

The therapy is minimally invasive. It consists of a single session of various injections in the animal's rear legs using simple needles that are commonly used in cosmetic treatments. These injections introduce gene therapy vectors, with a dual objective: to express the insulin gene and that of glucokinase. When both genes act simultaneously they function as a "glucose sensor", which automatically regulates the uptake of glucose from the blood, thus reducing diabetic hyperglycemia.

In some cases, monitoring continued for over four years, with no recurrence of symptoms.

Bosch, one of the top diabetes research experts in Catalonia, was the scientific leader for the B·Debate scientific debate Type 1 diabetes: New treatments and strategies for the new decade, held in Barcelona in 2010 (then under then name International Center for Scientific Debate). Two years ago he said, "while clinical and research efforts need to improve existing therapeutic strategies, there is also a considerable need for finding new, alternative treatments for diabetes.”

More information is available on the UAB webiste.