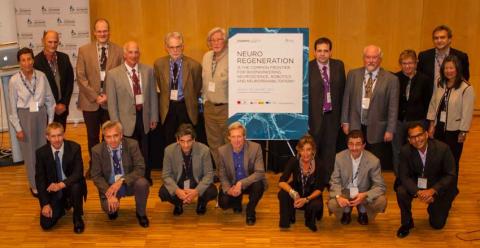 The central nervous system’s limited capacity for self-repair after neurological injury, which can lead to loss of mobility or speech among other things, is the main cause that leads these conditions to become chronic. For many years, these injuries were thought to be irreversible. However in the nineties, it was shown that neurons have the ability to regenerate in vitro. Afterwards, scientists also showed that this capacity persists in vivo.

At the scientific debates Neuroregeneration: Is It the common frontier for Bioengineering, Neuroscience, Robotics and Neurorehabilitation? held by B·Debate and Guttmann Institute on 23 and 24 October in Barcelona, national and international experts shared breakthroughs in the latest neuroregeneration therapies, discussed how to improve prognosis and recovery for spinal-cord injuries and how to optimize the nervous system’s regenerative capacities.

The mechanisms that make us remember and learn things make us who we are and, at the same time, prevent the nervous system from being more flexible and regenerating itself after an injury. The nervous system, in order to preserve our identity, tends to inhibit neurons’ ability to regenerate, but these mechanisms, in the case of pathologies, could be contributing to making these injuries chronic.

According to Dr. Tormos, if the conditions that block the nervous system from regenerating are modified, the affected areas can be stimulated to carry out this function. One example, already being used in clinical trials is to implant cells that serve as a bridge to fill the gap created by an injury in the nervous system. Data indicates that these cells, known as Schwann cells, can work as a scaffold (support structure) for neuron growth, thus allowing these to regenerate.

Another technique discussed during the B·Debate sessions consists of using antibodies that block the molecules that inhibit the regeneration of neurons in the spinal cord. Experiments are also being done with enzymes that modify the environment so that it doesn’t impede nerve regeneration.

Research is also being done in the field of neuronal stem cells. After successful results in animal models, clinical trials are underway with human subjects. The results, although very preliminary, show that there could be an objective improvement in patient sensitivity.

One of the main handicaps in working in the field of neuroregeneration is that we know very little about how the nervous system really works. This is one of the main reasons why the step from experimentation in the laboratory to clinical trials in patients is very slow. Two global projects are studying how the human brain works in detail. One is the BRAIN project, in the United States, and the other is the European Human Brain Project, in which the Barcelona Supercomputing Center, University of Barcelona and Pompeu Fabra University are representing Catalonia. As Dr. Josep Maria Tormos explained, “these two projects could yield highly significant information to allow us to reconsider questions and reinterpret data from clinical trials that we don’t currently understand.”

Neuroregeneration opens up an enormous range of possibilities to cure neurological injuries, like spinal-cord injuries resulting from traffic accidents. This huge challenge can only be tackled through collaboration among experts in a wide variety of fields, like neuroscience, bioengineering, robotics and neurorehabilitation. This was Dr. Alvaro Pascual-Leone’s recommendation: "Neuroregeneration isn’t feasible without a multidisciplinary approach." Pascual-Leone is a professor of Neurology at Harvard Medical School and director of the Berenson-Allen Center for Noninvasive Brain Stimulation. Fostering this dialogue and interdisciplinary work is one of the aims of this B·Debate.

B·Debate International Center for Scientific Debate Barcelona is an initiative of Biocat and the “la Caixa” Foundation that seeks out solutions and answers to social needs and challenges in the life sciences by holding top-notch international scientific debates.