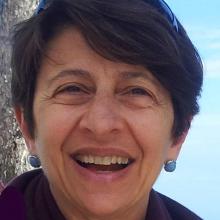 Anna was trained in Human Genetics and Medical Genetics at the University of Rome “La Sapienza”, Italy. After a postdoctoral training period at the Institute of Cell Biology of the National Research Council, she moved to the US where she did further postdoctoral training at University of California in Berkeley and in UC San Francisco.
In 1993, she took an Assistant Professor position in the Department of Anthropology at Northwestern University, moving to the University of Chicago in 1996. She is now a Professor in the Department of Human Genetics and a member of the Institute for Genomics and Systems Biology, the Committee on Genetics, Genomics and Systems Biology, the Committee on Clinical Pharmacology and Pharmacogenomics, and the Committee on Molecular Metabolism and Nutrition.
Anna has had a long-standing interest in using genetic data to make inferences about human demography, with a particular focus on the history of population size changes. In addition, she has been interested in detecting signatures of genetic adaptations to local environments especially at susceptibility genes for common diseases or genes coding for drug and steroid hormone metabolizing enzymes. More recently, her group has combined population genetic approaches and functional genomic analyses to elucidate the genetic bases of inter-individual and inter-ethnic variation in transcriptional response phenotypes.