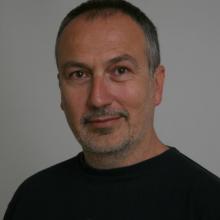 Dr. Boris Turk received a PhD degree in Chemistry from the University of Ljubljana,
Slovenia, in 1993. Following a postdoctoral work with Ingemar Bjork at The Biomedical Center in Uppsala, Sweden, he received a PhD in Medical and Physiological Chemistry in 1996. He returned to Slovenia and since 1998 he is head of the Department of Biochemistry and Molecular and Structural Biology at the J. Stefan Institute and since 2011 professor of biochemistry at the University of Ljubljana. His lab focuses on the understanding of the role of proteases, in particular lysosomal cysteine cathepsins, in inflammation-associated diseases,
including cancer and arthritis. This includes understanding of the molecular mechanisms of involvement of cathepsins in the extracellular milieu with a goal to evaluate their potential in diagnosis and therapy. He was coordinator of the EC-strep FP7 project LIVIMODE (2009- 2014) aimed at developing novel imaging agents for noninvasive in vivo imaging of proteases in cancer and arthritis. He is an EMBO member since 2007, a member of Academia Europea (London) since 2013, past president and secretary of International Proteolysis Society and
secretary general of European Cell Death Organization (ECDO).