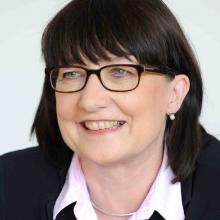 Christine Lang studied biology at the Ruhr University Bochum and University of Sussex, UK. She finished her PhD doctorate in 1985 at the Department of Botany in Bochum. She started her professional career as a leading scientist and group leader for molecular biology in the Chemical Industry. While dedicated to working in an industrial environment and bringing ideas into application, she never lost touch with the academic world and took up a senior scientist position at Technical University Berlin in 1993. She received her habilitation in 1996 and was appointed Associate Professor for Microbiology and Molecular Genetics at Technical University Berlin. She holds this position since 2006.
In 2001 Christine Lang founded the company ORGANOBALANCE GmbH and established it as an R&D facility to develop novel microbial active ingredients and strains for food, feed, personal care and pharma applications. The company is a part of Novozymes AS since 2016. She is the company’s Managing Director.
In 2010, Christine Lang and Bernd Wegener co-founded BELANO Medical AG (formerly: ORGANOBALANCE Medical AG).
Christine Lang takes an active part in biotechnology and entrepreneurial networks, she is part of the DIB/VCI and the DECHEMA boards. She is a consultant for the German government for Bioeconomy topics (co-chair of the German Bioeconomy Council).