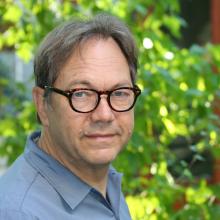 Luc Steels is currently research professor at the Catalan Institute for Advanced Studies (ICREA), working in the Institute for Evolutionary Biology (IBE - UPF/CSIC) in Barcelona. He studied linguistics at the University of Antwerp (Belgium) and computer science at MIT, specializing in Artificial Intelligence under Marvin Minsky. After his studies he first worked in the application of knowledge-based AI for industrial expert systems at the geophyiscal measurement company Schlumberger (in the US and France). In 1983 he returned to Europe and founded the Artificial Intelligence Laboratory of the Free University of Brussels (VUB) which quickly became one of the pioneering labs in Europe in the nineteen-eighties, pushing advances in knowledge technologies, neural networks and genetic algorithms. In the nineties his laboratory spearheaded work in behavior-based robotics. In 1996, Steels became founding director of the Sony Computer Science Laboratory in Paris, a laboratory which became known for highly innovative researchers in the domain of language, music and sustainability. In 2011 he created the Language Evolution Lab at IBE in Barcelona which focuses on modeling how new words, meaning and grammar can arise through situated embodied interactions between agents.

Since the nineteen-eighties, Luc Steels has played a big role in the organization of AI. He was founding chairman of the Belgian AI association, which merged later with the Dutch AI association to form BNAIC. He was involved in setting up ECCAI, the largest organization of AI in Europe, and was founding editor (with Bob Wielinga) of AI Communications, the largest European AI journal. He chaired some of the key conferences in AI in Europe, such as ECAI, SAB, EKAW, a.o.. He participated as P.I. and coordinator in a dozen major European projects, and helped shape the European research agenda towards AI at the EU level.