Artificial bacteria will live in our bodies to treat certain diseases

International experts analyze how to bring scientific advances to society in order to improve quality of life at CaixaForum Barcelona with B·Debate, International Center for Scientific Debate, an initiative of Biocat and the “la Caixa” Foundation 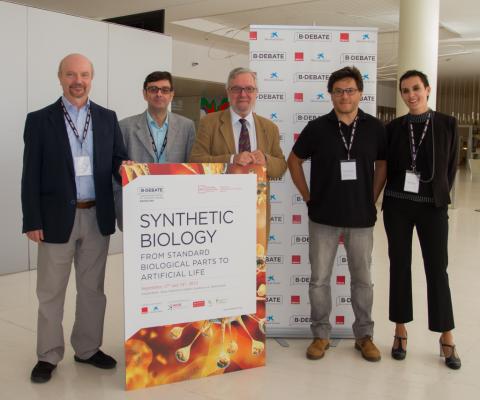 Breakthroughs in synthetic biology are changing the face of medicine as we know it. “The doctors of the future will be bacteria living in our bodies,” explained Víctor de Lorenzo, researcher at the CSIC Spanish National Center for Biotechnology. New knowledge of how to bioengineer the microbes that inhabit our bodies makes it possible to design microorganisms to administer drugs, to reprogram stem cells and to regenerate organs and tissue damaged by disease.

Experts highlight that we are on the verge of a new revolution: the domestication of microorganisms. Just like human beings previously domesticated animals as livestock or controlled technology to generate energy. According to researchers, the synthetic biology revolution will create new possibilities for economic growth given its great capacity for transformation.

Some of the most noteworthy applications of this science include redesigning bacteria to detect and treat tumor cells, obtaining drugs like opioids and antimalarials more quickly, producing biofuel from the E. coli bacteria present in our intestines, and creating microorganisms that eat up oil to clean environmental pollution like that from oil spills.

National and international experts in synthetic biology met on 17 and 18 September at CaixaForum Barcelona with B·Debate, International Center for Scientific Debate, an initiative of Biocat and the “la Caixa” Foundation. Enric Banda, head of Science and the Environment for the “la Caixa” Foundation, highlighted the importance of these events to “forge new collaborations” between research centers.

Jordi Garcia-Ojalvo, the scientific leader for this B·Debate and director of the Dynamical Systems Biology Laboratory at Pompeu Fabra University, has defined systems biology as “genetic engineering 2.0”. This discipline goes beyond modifying genes. It aims to reprogram living organisms to do things they wouldn’t naturally do, or even create artificial life from scratch.

Ricard Solé, ICREA research professor and director of the Complex Systems Laboratory at Pompeu Fabra University, lauded the “great potential” of synthetic biology, as it will give us the chance to jump evolutionary hurdles if researchers can send the right signals to cells to start up the genetic machinery, for example for regeneration. “Synthetic biology is still in its adolescence, but it’s teaching us things at breakneck speed,” he summed up this discipline’s 10-15 years of history offering the chance to engineer life.