It is a dynamic site that provides information in a more accessible, intuitive way and connects related contents for easier browsing 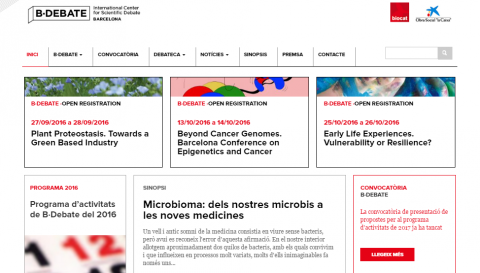 The International Center for Scientific Debate Barcelona, B·Debate, which aims to help position Barcelona as a benchmark in generating knowledge and Catalonia as a country of scientific excellence, has just launched a new, more dynamic website to boost the visibility of its scientific events. This new tool aims to become the main channel for disseminating these events to the scientific community and society in general.

The site offers information on all of the activities held under the B·Debate brand, an initiative of Biocatand the “la Caixa” Foundation, in a way that is easier to understand, simpler and more organized, with a clear structure and good browsing flow, making it more usable. With this new tool, B·Debate also shares the knowledge and results obtained through the debates, in the form of news and synopses. It is available in two languages: Catalan and English.

A web-tree with six main blocks

In addition to these large sections, the new website also features a new format on the debate pages, which combines a static and dynamic section. The static section has basic information on the debates, and the dynamic section has five subsections: description, agenda (with a printable version), speakers, travel and venue (with a map of the area and directions to get there) and synopsis. The same page also features contents associated with the debate, including news articles and press releases.

On 27 and 28 September, B·Debate is holding an event focusing on plant proteostasis in collaboration with the Center for Research in Agricultural Genomics and the COST Proteostasis project. The fourth edition of the Barcelona Conference on Epigenetics and Cancer (BCEC) will be held on 13 and 14 October, led this year by the Institute for Research in Biomedicine Barcelona. And on 25 and 26 October, the Autonomous University of Barcelona Institut de Neurociències is promoting Early Life Experiences, an event focusing on how our first experiences (in childhood and adolescence) contribute to the development of the nervous system.