His work has focused on Spanish scientific policy, the role of science in society and the impact of new technology on agriculture 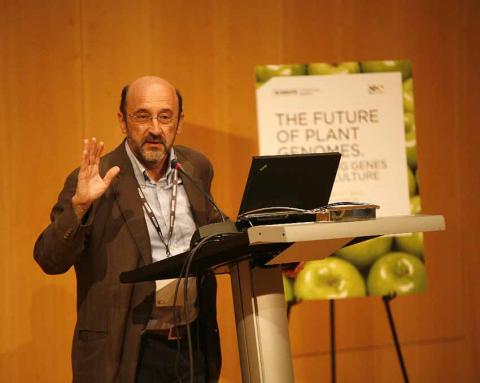 Catalan biologist and researcher with the Spanish Council for Scientific Research (CSIC) Pere Puigdomènech has been recognized by the Confederation of Spanish Scientific Societies (COSCE) with the 2013 award for raising scientific awareness, with a €5,000 cash prize.

The panel of judges valued Puigdomènech’s career in the field of raising scientific awareness, which began in 1970. Since then, he has published more than five hundred articles in journals and papers including Nature, La Vanguardia, El País and El Periódico. His work has focused on Spanish scientific policy, the role of science in society and the impact of new technology on agriculture. He has written stories and novels like Noves estratègies i altres contes científics, El gen escarlata and Andreadòria TM.

In recent years he has been associated with B·Debate —an initiative of Biocat and the "la Caixa" Foundation— as the scientific leader of the debate The Future of Plant Genomes. Harvesting Genes for Agriculture, together with Jordi Garcia-Mas of the CRAG, and as a speaker and moderator for the debates Feeding the world, Culture and life and Science in the kitchen, which featured hundreds of scientists and non-scientists.

The awards ceremony was held 13 June in the auditorium at the Complutense University of Madrid Historical Library during the yearly meeting of the COSCE, which this year focused on the relationship between science and patronage. The event featured heads of organizations like the "la Caixa" Foundation, the Vodafone Foundation —which sponsors the COSCE award for scientific awareness— and the Esther Koplowitz Foundation.