Culture and Life: Dialogues on the Impact of Biotechnology

The International Center for Scientific Debate and the CCCB offer this series of conferences, open to the general public, which will include scientists and thinkers like Miguel Beato, María Blasco, Inez de Beaufort and John Gray 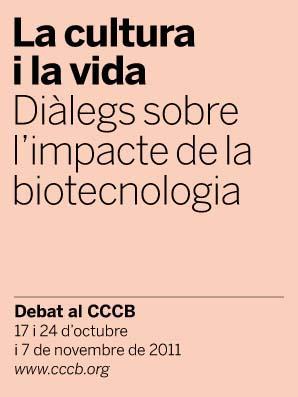 For some time now, progress in the life sciences has been giving rise to very far-reaching social changes and there is some consensus over the supposition that the next technological revolution will come from the domain of biology. With scientific advances, hopes for human life expectancy continue to flourish as new promises and problems are also emerging. Biotechnology has delivered into human hands responsibilities that were once in the hands of the gods and is now confronting us with critical moral, political and economic questions.

With the aim of contributing towards a wide-ranging debate on the new biological paradigm, the International Centre for Scientific Debate (ICSD) —an initiative of Biocat, with support from the “la Caixa” Welfare Projects— and the Centre de Cultura Contemporània de Barcelona (CCCB) offer the following cycle of lectures, from 17 October to 7 November 2011.