According to Jaume Bertranpetit, during the B·Debate and CCCB lecture series, the most difficult aspect of our evolutionary process to see is how selection has led to complex characteristics like intelligence 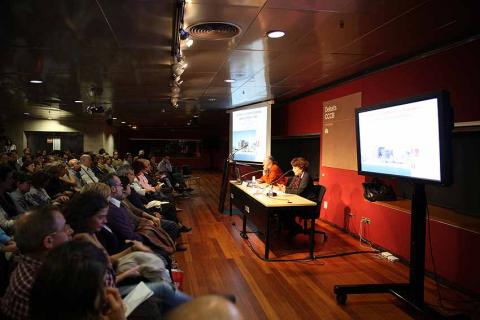 We no longer need to look at visible traits of species in order to know how they’ve evolved; we can study their genetic information and compare it with other individuals to discover how far apart or close together they are in the evolutionary process of natural selection. However, although we can describe the genome, we don’t yet understand it: as if it were stored on a CD and we don’t have any software to open it.

Jaume Bertranpetit, professor of Biology at Pompeu Fabra University (UPF), spoke about the evolutionary process and the importance of the genome to understanding adaptations at the conference entitled Natural selection in humans: past, present and future as part of the lecture series Evolution and culture. Human nature in transformation held by B·Debate and the Centre de Cultura Contemporània de Barcelona (CCCB) from 19 October through 11 November 2013. Bertranpetit wove examples to explain how humans have evolved and how culture influences modern adaptation into his lecture. “We’ve expanded our concept of normality; our chances of survival have been democratized,” he said to explain how the force of purifying selection has diminished. In the future, thus, great changes aren’t expected to take place because now not only the strongest survive, “we adapt our surroundings so we don’t have to.”

And culture, understood as an evolutionary force, promotes survival and reproduction. Biocat CEO Montserrat Vendrell presented the lecture in which nearly 200 people participated, as well as moderating the question and answer session.

‘Homo sapiens: an unknown species’, to conclude the series

The next, and final, conference in this B·Debate lecture series will be given by Juan-Luis Arsuaga, director of the Center for Research on Human Evolution and Behavior at the Complutense University of Madrid-Carlos III Health Institute (ISCIII) and co-director of the Atapuerca team. His lecture Homo sapiens: an unknown species? will take place on 11 November at the CCCB. The conference is open to the public and will be moderated by Núria Sebastián, professor of Psychology in the UPF Department of Information and Communication Technology.

Advanced ticket sales at the CCCB box office and through Telentrada (902 101 212 and www.telentrada.com). Admission fee: €3. Friends of the CCCB, unemployed and under 12s: free. Simultaneous translation into Catalan available.