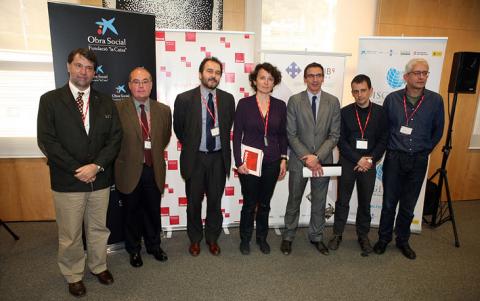 Nearly 150 international scientific experts from fields including anthropology, entomology, biosecurity, and climate science met yesterday and today during the conference Migrant Health and Imported Diseases: meeting research challenges, held at CosmoCaixa Barcelona. They discussed the repercussions for Europe of the arrival from abroad of diseases that were eradicated locally in the past, including the consequences of these diseases for public healthcare systems. The experts analyzed current and projected future scenarios of the healthcare provided to immigrants carrying these diseases, and affirmed that healthcare services must tackle prevention and treatment of these diseases to prevent them from spreading, and must make strides in clinical research.

The conference was organized by the International Center for Scientific Debate (ICSD) —an initiative of Biocat supported by the "la Caixa" Welfare Projects— plus the Barcelona Centre for International Health Research (CRESIB), and the Institute for Global Health of Barcelona (ISGlobal).

Malaria and yellow fever are the best known of these maladies in Europe, although recent outbreaks of dengue fever, leishmaniasis, and various diseases transmitted directly by mosquitoes have been detected in non-endemic areas. Vectors are crucial to the transmission of theses diseases; thus, the more that researchers know about the vector, the better they can understand the disease. The presence of the common mosquito (Culex pipiens) and the Asian tiger mosquito in Catalonia could pose a serious risk of new diseases arising here. Thus, scientists must learn as much as possible about these vectors and keep them under control.

Besides the effects of imported diseases in Europe, other major issues covered included the health of immigrants, including relevant social determinants, and facilitating immigrants’ access to healthcare. The appearance of some of these diseases in certain areas of Europe has led the scientific and medical communities to devise new public health strategies that account for the difficult conditions facing immigrants—many of whom are illegal—, such as limited access to health services.

Various studies by some of the conference speakers illustrate the difficulties that female immigrants face when accessing medical care, as they suffer the social consequences of both gender and ethnic inequalities. The studies have emphasized the problems that these women deal with in the prevention, diagnosis and treatment of cancer, especially breast cancer. Scientists such as Heide Castañeda have focused their research on healthcare and health policy inequalities suffered by illegal migrant workers, chiefly women. Castañeda has completed a study on gender, health and illegal immigration in Germany and the USA.

The conference participants underscored the need to establish new mechanisms to enable immigrants to receive adequate healthcare, while affirming the need for new policies on prevention, monitoring and control of these diseases. In this context, Ursula Karl-Trumm, who holds a PhD in health and medical sociology, is working on a research project that reflects work done by NGOs and other groups that defend immigrant rights. With this project, she aims to break the healthcare restrictions that certain national regulations impose on immigrants, for example, in terms of emergency healthcare, or maternity and obstetrics services. Karl-Trumm is hoping to establish a knowledge base for development and exchange of good practices in healthcare for undocumented immigrants, creating a legal and financial framework for the EU-27. She is currently amassing a database of current healthcare practices in the EU and identifying transferable models of good practices.

The conference attendees also explored other medical topics related to immigrant health, such as mental health care. For example, David Ingleby, professor at the Faculty of Social Sciences and Behavior at the University of Utrecht, believes that in light of the immigrants that have been forced to leave their native country and that face difficulties receiving medical attention in their new country of residence, the entire healthcare system needs to be reviewed, especially in terms of mental health services.

The participants agreed that the topics of clinical research and healthcare cannot be limited to scientists and medical professionals: these issues must be dealt with by society at large and by politicians.

In terms of attaining research progress, the experts affirmed that results from social science research on the social determinants of immigrant health must be effectively communicated to healthcare professionals and politicians.

In keeping with the theme of the conference, there will be a symposium this afternoon entitled What Challenges Do Imported Diseases Pose to Catalonia? The symposium, open to the entire Catalan scientific community and to the general public, will cover the current and future emergence of these diseases, and their consequences for the healthcare system.

The symposium will be kicked off by Dr. Montserrat Vendrell, CEO of Biocat; Mr. Ignasi López, sub-director of Science, Research and the Environment at the “laCaixa” Foundation; and Dr. Joaquim Esperalba, General Director of Healthcare Planning and Resources of the Catalan Government.

Identifying disease-carrying vectors, understanding how they function, and determining where they travel

Malaria was endemic to Western Europe until the mid-twentieth century. Its principal vectors have included various species of the genus Anopheles, including An. atroparvus, An. labranchiae and An. Sacharovi, the former two of which were the first vectors identified in Spain. These vectors are still found in Europe: for example, in Spain, An. atroparvus is widely distributed geographically.

In the past yellow fever and dengue fever caused devastating epidemics in various European countries, including Spain, France, Italy and Greece. The primary vector was Aedes aegypti, a species which has since disappeared from Western Europe despite having once been rather common. Indeed, it was commonly found in Spain until the mid-twentieth century. Despite the fact that its disappearance has long been confirmed, the reason for its disappearance remains unknown. Importantly, this species was recently identified in Madeira, and therefore, currently threatens to reach Europe via Portugal.

The past few decades have witnessed outbreaks of several other diseases carried by vectors, including West Nile virus (WNV) fever, which appeared regularly in the 1990’s in numerous Mediterranean countries in Europe and Africa. Its principal vector is the common mosquito (Culex pipiens), which, as its name suggests, is widely distributed throughout Spain. In 2010 WNV fever was detected in multiple European countries, including Spain, France, Greece and Romania. This disease affects wild birds, horses and humans. In Greece, 250 people were infected, 32 of whom died. In Spain, only two people were infected, both of whom recovered well; however 10 of the 40 horses that came down with the disease died. Researchers have imputed Culex pipiens as the vector in these outbreaks. The year 2010 also marked the discovery of a case of malaria in the region of Monegros, Spain, in what may be the first case of autochthonous malaria in the country since the disease was eradicated in the 1960’s.

In 2007 there was an outbreak of Chikungunya fever in Italy, the first ever autochthonous case of the disease caused by the Chikungunya virus (CHIKV). Its vector is the Asian tiger mosquito (Aedes albopictus), an invading species. Since that outbreak, there have not been any other autochthonous cases in Italy, but there have been at least three cases in France, where a couple of cases of dengue fever have also been detected. Importantly, this species was first detected in Spain in 2004, in Catalonia, and is currently expanding widely having become common in the metropolitan area of Barcelona, and other coastal regions of Catalonia and neighboring autonomous regions.

The role of climate change

The expansion of these vectors is more a result of trade and globalization than of other factors such as climate change, although this phenomenon can still have major effects. A slight rise in global temperatures could initially favor propagation of the mosquito, since its larvae are aquatic; nevertheless, future water supplies will be limited. Precipitation patterns and human water use influence mosquito expansion much more than do other factors. However, predicting how climate change will affect rainfall over the course of a given year is difficult.

There is a solid body of evidence showing that the arrival of Aedes albopictus is related to international trade of used tires and other goods. The current presence of An. atroparvus is more related to rice harvesting than to any other factor, and the omnipresence of Culex pipiens derives not from climate change, but rather from this species’ ecologic plasticity, whereby it exploits a diverse array of larval habitats.

Ticks, ceratopogonids and phlebotomes comprise another group of vectors that could prove important in to the re-emergence of certain diseases. Accordingly, boutenneuse fever, bluetongue disease (in sheep), and various types of fevers transmitted by phlebotomes must be monitored carefully.