On 29 and 30 October, international experts met at CosmoCaixa, called together by B·Debate, an initiative of Biocat and the "la Caixa" Foundation, to debate the latest advances in the epigenetics of cancer for the third consecutive year 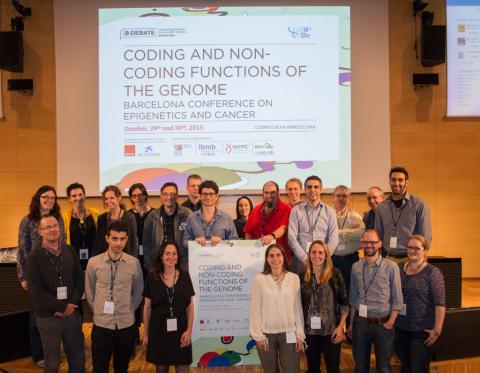 Each human cell holds up to two meters of DNA, but only approximately 2% of this genetic material plays a specific role. For years, scientists had believed that the remaining 98% was junk DNA, but they are now seeing that even though these regions of the genome don’t code proteins, they also play a significant role in the appearance and evolution of diseases like cancer, among other functions.

The functions of junk DNA (now known as the dark matter of the genome) were the focus of this B·Debate entitled Coding and Non-coding Functions of the Genome, which was part of the third annual Barcelona Conferences on Epigenetics and Cancer (BCEC). The BCEC is an annual series of conferences promoted by five leading Catalan research centers: the Center for Genomic Regulation (CRG), Molecular Biology Institute of Barcelona (IMB-CSIC), Institute of Predictive and Personalized Medicine of Cancer (IMPPC), Institute for Research in Biomedicine (IRB Barcelona), and the IDIBELL Cancer Epigenetics and Biology Program (PEBC).

"Personalized medicine must take non-coding DNA into account, or it only has a partial view of the problem,” says Luciano Di Croce, co-leader of this B·Debate with Marcus Buschbeck and head of the CRG epigenetics of cancer laboratory. Stem cells will also feature heavily in this conference, as they have in common with cancer cells a great capacity for reproduction, although the latter have lost their ability to self-regulate and stop differentiation. Understanding the basic biology of stem cells could potentially lead to cancer treatments, although this path must still be explored.