There are more than 40 nanodrugs on the market, most for cancer, but now the challenge is to lower costs so they can be integrated into the healthcare system 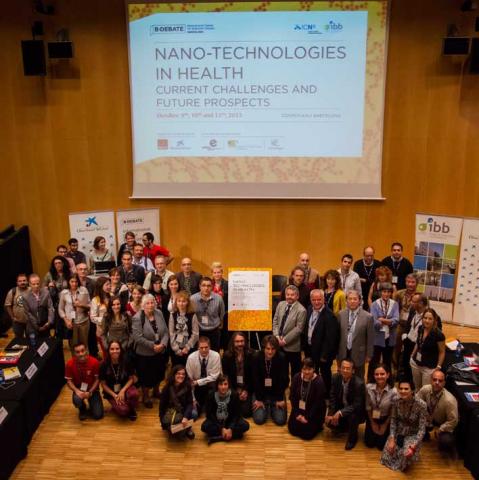 "One of the aims of nanotechnology is to sequence an individual’s genome in one hour for $100 by 2020," explained Yoshinobu Baba of Nagoya University (Japan) this week at the scientific debates Nanotechnologies in Health: Current Challenges and Future Prospects organized by B·Debate, the Catalan Institute of Nanoscience and Nanotechnology (ICN2) and the Institute of Biotechnology and Biomedicine (IBB-UAB) in Barcelona. The event featured more than 60 national and international experts.

From 9 to 11 October these scientists debated on available nanomedical tools, how to continue promoting innovation in this field and, above all, how to accelerate application in patients. Nanotechnology is a booming area of research with great potential in many sectors. In medicine, it promises to revolutionize the diagnosis of diseases, drug delivery and many areas of research, development and clinical application. "Trials based on nanomaterials are promising for cancer diagnosis," said Joseph Wang, keynote speaker at the debates and professor of Nanoengineering at the University of California, San Diego (United States).

Since the beginning of the 21st century, healthcare expenditure has skyrocketed due to increased life expectancy and the subsequent ageing of the population. According to Dr. Víctor Puntes, one of the scientific leaders of this B·Debate, in the future nanotechnology will allow for ‘low-cost’ diagnostics and therapeutics for diseases like cancer. Dr. Nerea Roher, also a scientific leader of these debates, said that nanotechnology-based devices require little material and production costs aren’t very high. The current limitations in making these devices ‘low-cost’ are due to lack of knowledge and high research costs, not the final cost of the product itself.

Early detection of cancer is key to increasing patents’ survival rate. These diagnostics require the development of highly sensitive, highly precise analytical devices. Trials based on nanomaterials are promising. Nanoparticles that can selectively recognize cancerous cells and nanosensors that can detect abnormally low amounts of molecules in biological fluids to reveal the existence of malign tumors and other diseases have already been developed.

Clinical trials have also been carried out with nanoparticles for controlled drug delivery at the specific point of therapeutic interest. With this procedure, scientists hope to specifically treat the area with the problem and not affect healthy areas, like what happens with current chemotherapy. According to Dr. Antonio Villaverde of the IBB-UAB, this high specificity allows for use of new drugs that were previously discarded for their high toxicity, thus increasing efficacy of treatments.

In fields like cardiovascular disease, for example, scientists have been able to control blood fluidity, blood pressure, monitor heart movements and eliminate atheromas (heart damage common in patients with atherosclerosis). The latter, according to Víctor Puntes, can be detected and treated using nanoparticles that absorb light with a specific wavelength. “Nanoparticles are injected into the tumor and then light is applied, like for example infrared light, and the photons from this light are absorbed by the nanoparticles to give off energy and destroy the tumor.” The potential applications in immunology are also numerous: better vaccines, both prophylactic and therapeutic, and better control of mechanisms that activate the immune system, among others.

B·Debate International Center for Scientific Debate Barcelona is an initiative promoted by Biocat and the “la Caixa” Foundation to seek out answers and solutions to challenges and needs facing society in the field of the life sciences through top-notch international scientific meetings. The upcoming scientific debate sessions are: