“Pollution is the second most important health risk,” says María Neira, WHO director of Public Health. Each year 7 million people around the world die from air pollution 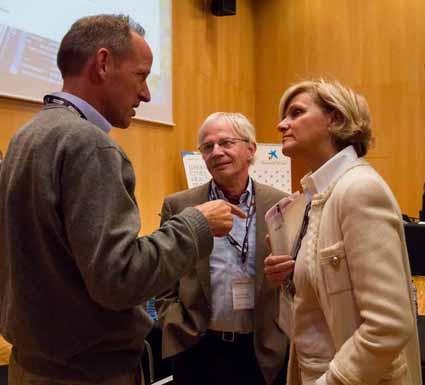 Recent scientific studies show that people who live near green zones live longer and have a lower risk of suffering from cardiovascular disease, obesity, mental health problems and complications during pregnancy like low birth weight.

Dr. Mark Nieuwenhuijsen believes that “this is largely due to the fact that these people get more exercise and have more social contact, with the corresponding physical and mental health benefits.” Nieuwenhuijsen coordinates the Phenotype project at the Center for Research in Environmental Epidemiology (CREAL) — which is a member of the ISGlobal alliance— and was the scientific leader for the scientific debates entitled Green Cities Healthy People. Planning Healthy Urban Spaces held by B·Debate and CREAL on 30 and 31 October in Barcelona with approximately 25 national and international experts. The Phenotype project, funded through the European Union’s 7th Framework Program, aims to evaluate and identify actions to determine the capacity of public green zones to address health problems both in urban centers and rural areas.

Other studies suggest that aggressive and delinquent behavior also decreases, sleep patterns improve and patients recover better from some illnesses. According to Dr. María Neira, head of the Department of Public Health and the Environment at the World Health Organization (WHO), who also participated in these scientific debates, there are specific examples like the city of Bogota where pacifying traffic has led to decreased violence in public spaces. Making traffic less chaotic led to increased social relations and safety with the corresponding social benefits among the most disadvantaged groups.

Health problems due to air pollution and physical inactivity

The WHO estimates that 60% of the global population will live in urban areas by 2030, leading to increased urban-planning needs. Over the past decade, renewed interest has been seen in urban-planning proposals that address health problems. Physical inactivity is one of the most significant health problems of the 21st century, leading to 3.2 million deaths per year and with a huge impact on the deadliest chronic diseases: 21.5% of cases of coronary artery disease, 14% of diabetes, 16% of colon cancer and 10% of breast cancer.

Plus, stress and air and noise pollution are increasingly important factors in the study of diseases. According to Dr. Neira —as she explained in an interview with La Vanguardia— today we can say that “pollution is the second most important health risk.” Approximately 7 million people around the world die prematurely as a result of air pollution: 3.5 million from pollution indoors, like from solid fuels used for cooking, and 3.3 million from urban air pollution.

Green zones reduce stress and allow for greater physical activity, but that isn’t enough, “other initiatives will be necessary, like promoting cycling, walking and public transport.”

Barcelona is a high-density city. Compared to other cities like Madrid or New York, it doesn’t have a large central park but instead small green zones and the Collserola Natural Park. “The problem isn’t about having one large park or many small ones, it’s about whether or not people use them,” explained Neira.

According to Dr. Nieuwenhuijsen, the green zones in Barcelona are in good conditions and parks like the Ciutadella are truly accessible and frequently used. Nevertheless, he adds, new green zones are needed and urban planning must continue to be improved, taking into account health problems.

It must be noted that the creation of healthy environments is a priority action under "Health 2020", the new pan-Europe strategy for public health coordinated by the WHO. The experts that participated in this B·Debate event believe that the only way forward to create healthy green zones for urban populations is to establish coordinated strategic plans involving research, public health practices and urban planning.