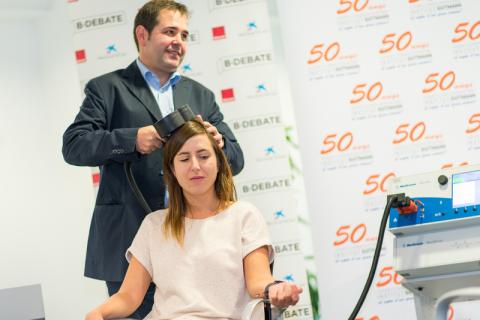 A healthy brain helps keep the rest of the body healthy. People with good brain health can better face ageing and disease. For example, a patient with good brain health can better control diabetes and has a lower risk of getting cancer. This is why scientists are placing more and more importance on maintaining brain health, as several international experts explained at a press conference, brought together by B·Debate, International Center for Scientific Debate, an initiative of Biocat and the “la Caixa” Foundation.

What affects brain health? Exercise, diet, social relationships, sleep quality and years of schooling are just some. Doing exercise, for example, “makes the frontal cortex of the brain grow thicker, improving cognitive and impulse control and promoting the creation of new neurons,” explained Álvaro Pascual-Leone, director of the Berenson-Allen Center for Noninvasive Brain Stimulation and professor of neurology at Harvard Medical School. This is why he believes physical exercise is more important to a healthy brain than a healthy body.

According to Pascual-Leone, expert in neurology, “Medical breakthroughs have allowed for the body’s organs to stay healthier longer. But how can we maintain the same level of wellbeing in the brain?” This is why various international research projects are devoting funds to mapping the human brain. Some examples include BRAIN, in the United States, and the Human Brain Project, in the European Union. Both seek to identify factors involved in neurodegenerative diseases and prevent them to the extent possible.

“The brain is the main organ of research in the 21st century,” summed up Head of the Acquired Brain Injury Unit at Institut Guttman Montserrat Bernabeu. Institut Guttman, which coordinated these B·Debate sessions, is working on prevention mechanisms. Dr. Bernabeu gave the example of stroke prevention and explained how some risk factors like diet and blood pressure can be controlled.

Pascual-Leone also highlighted the importance of changing how we’ve done things so far. Instead of curing diseases when we start to see symptoms, we have to prevent them. “We tend to think that the brain begins to decline when we get older, but we’ve already lost most of our neurons before we even start pre-school. What we need is the best and healthiest brain possible at every age.”