This is the first scientific meeting of its kind ever to be held in Spain, whereby ideas are evaluated in the form of a competition 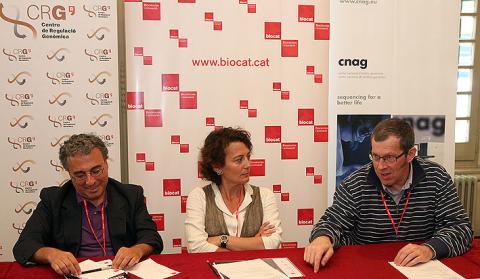 Some 50 researchers from Spain, Great Britain, Italy, Russia, France, Germany, Canada and China will meet at the Sequence Mapping and Assembly Assessment Project dnGASP/RGASP3 (SMAAP) workshop, held from 5 to 7 April at the Museu Colet, in Barcelona. In fact, the workshop is being held in the form of a competition to find the best tools for genome sequencing, mapping and assembly, and reading of alignment data, using second-generation sequencing tools.

Sequencing technology has made leaps and bounds since the first human genome was sequence a decade ago: we are now clearly in the genomic era, in which genomes can be sequenced much more rapidly and at far lower costs than before. Although numerous massive sequencing projects have been undertaken (such as the Cancer Genome Sequencing Project and the 1,000 Genomes Project), researchers have yet to reach a consensus on the best methodologies for genome analysis.

Barcelona is a key genomics research hub in Europe. Researchers from the city are participating in and leading various sequencing projects, and are hosting the SMAAP workshop, the goal of which is to find the best methods and systems for genome sequencing and data management. The contestants were chosen based on their submitted proposals for a genomic analysis solution to a problem devised by the Workshop’s scientific committee in the context of two projects: RNASeq Genome Annotation Assessment Project 3 (RGASP3) and the de novo Genome Assembly Assessment Project (dnGASP).

This is the first scientific meeting of its kind ever to be held in Spain: a competition aimed at developing new scientific methods. “In an era in which thinking outside the box is universally recognized as a way to accelerate scientific progress and technological innovation, competitions are considered to be among the most creative instruments for generating innovative ideas, partly because they draw on contributions and approaches from diverse disciplines aimed at overcoming new scientific challenges,” explains Miquel Martí, director of the International Center for Scientific Debate (ICSD), which co-organized the SMAAP workshop.

A scientific competition to unravel the human genome

For three days, the participating research groups will present their proposed solutions to the problem, discussing sequencing systems and algorithms to reach a consensus on standard methods. The scientific committee will evaluate the proposals, and then score them according to established criteria. The result will be a series of detailed, analogously scored proposals, which the scientific community can then assess to determine the system that it deems best. The open discussion format of the workshop is expected to foster multidisciplinary working standards that should enable advances in identification of the functional elements of the human genome.

These types of workshops offer dual benefits to the scientific community. “On one hand, they benefit end users of the methods, providing them with more information for choosing alternative methods; on the other, they benefit the developers of the methods, enabling them to create the most imaginative and promising solutions for the most pressing problems,” affirms Roderic Guigó, coordinator of the Bioinformatics and Genomics Program at the Centre for Genomic Regulation (CRG) and co-director of the SMAAP workshop. The other co-director is Ivo Gut, from the National Genome Analysis Center (CNAG).

“This is a new way of doing science, which implies a greater level of cooperation and coordination among research groups. Moreover, to adequately manage sequencing data, we need new, more-sophisticated alternatives to the currently available methods,” states Guigó. “In the short- and mid-term, the conclusions from this meeting will contribute to obtaining greater yield from nucleic acid sequencing methods and facilitate application of these methods to diverse fields such as medicine and biotechnology,” he adds.

The SMAAP workshop was organized by the International Center for Scientific Debate (ICSD), a Biocat initiative sponsored by “la Caixa” Welfare Projects, as well as by the CRG and the CNAG, with support from the Wellcome Trust Sanger Institute (WTSI); the European Bioinformatics Institute (EBI); the European project Revolutionary Approaches and Devices for Nucleic Acid Analysis (READNA) and the Encyclopedia of DNA Elements (ENCODE Consortium).

Within the framework of the international consortium ENCODE

The competition falls within the framework the ENCODE, one of the most important projects of the National Human Genome Research Institute (NHGRI) that was designed to identify all of the functional elements in the human genome sequence. The ENCODE pilot program, comprising two components, has proven successful at identifying and characterizing these elements, and has greatly stimulated promotion of new technologies to generate invaluable functional genomics data.

Based on the excellent initial results obtained with pilot program, the NHGRI decided to extend ENCODE to a production phase with the entire genome, together with other studies on the pilot scale. This production phase entailed creation of a Data Coordination Center, for registering, saving and viewing data, as well as a Data Analysis Center, for integrated analysis of these data. All of the data generated in ENCODE are publically accessible via the Data Coordination Center.

In July 2010, the first ever ENCODE meeting to be held outside the USA was held in Barcelona. The attendees presented the latest results from the project and discussed future challenges in human sequencing. The meeting drew some 60 bioinformatics specialists from around the world. They undertook computational analysis of the experimental data amassed from the human genome sequencing. The research groups shared, analyzed and combined their data, evaluated their results, and designed new strategies for the project.