Supercomputing to allow for creation of avatars for scientific testing

With this personalized ‘virtual copy’, doctors will be able to test patients’ reactions to different drugs as of 2020. 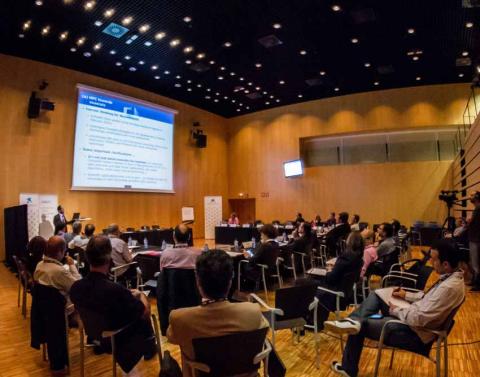 We are accumulating an ever-growing amount of information. So much so that the development of computers can't keep pace with the amount of data obtained through scientific research. Experts in supercomputing that participated in the scientific debates Towards in silico humans. A challenge for Exascale computing area in Barcelona —organized by B·Debate, the Barcelona Supercomputing Center (BSC-CNS) and the Institute for Research in Biomedicine (IRB Barcelona)— predict that the supercomputers of the future, based on exascale technology, will be able to carry out one trillion (one million billions) calculations per second with a speed one thousand times greater than the fastest machines available today.

Simulation has become the third pillar of science, alongside theory and experimentation. Modeling and simulation are opening up many new applications in the life sciences. According to the scientific leader of this B·Debate event, Dr. Modesto Orozco, "in the future each of us will have a sort of avatar, which doctors will be able to use to test our reaction to drugs, among other things."

Scientists have been able to simulate both molecules and whole organs. For example, the team led by Dr. José María Cela of the BSC has created a simulated heart with its corresponding blood flow, mechanical muscle and electrical conduction.  This model allows them to study, among other things, the effects of drugs on disorders like arrhythmias.

Another important project currently underway is the Human Brain Project, funded by the European Union and led by Dr. Henry Markram, which will use technology to reproduce the characteristics of the human brain. In diseases with high social impact, like Alzheimer and cancer, breakthroughs are still in the early stages.

One of the sectors in which supercomputing is having the greatest impact is pharmaceuticals. This industry has grown increasingly dependent on high-performance computing to obtain new drugs. According to Orozco, "pharmaceutical companies are using supercomputers to identify the most effective drugs for each disease." The use of exascale supercomputing would allow scientists, for example, to scan up to one thousand million compounds and cut down on the use of animal experimentation, which costs between €1,300 and 9,500 millions per year. This would be highly beneficial to the European economy, which produces nearly 40% of all pharmaceutical products available on the world market.

"In the near future it will be common practice for any drug approved by a regulatory agency to have first undergone software testing to predict any possible drug cross interactions and imbalances. Thus avoiding the possibility of running into these problems in the final stages of the clinical phase,” said Orozco.

According to Aniyan Varghese, a member of the European Commission Directorate General for Communications Networks, Content and Technology, “the industry has a growing dependency on high-performance computing in order to be more competitive and to innovate." Varghese recommended that centers of scientific excellence, like those with supercomputers, work together with companies. In this spirit, the importance the EU has given to high-performance computing can be seen in the Horizon 2020 program of funds for science.

Researchers believe that exascale calculations will be possible as of 2020. In order to meet this goal, scientists and engineers are facing important challenges, including creating powerful software to work with enormous amounts of data and cutting back on the colossal amount of power required by these supercomputers. Tihane-2, in China, is the most powerful supercomputer in the world at the moment, capable of carrying out 30,700 billion calculations per second. For it to work with exascale technology, it would need 1.6 gigawatts of electricity, enough to power approximately 2 million homes