Two out of ten children are at risk of neurological disorders

International experts met in CosmoCaixa between 26 and 27 November, in an event organised by B•Debate, an initiative run by Biocat and the "La Caixa" Foundation, to discuss neurological conditions in children 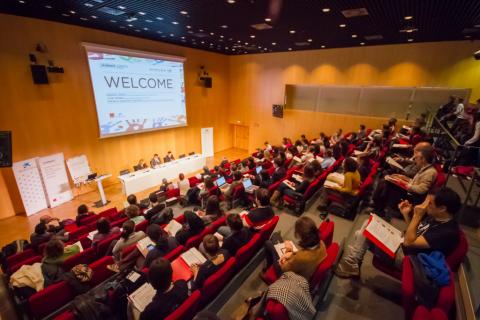 20% of children are at risk of developing a neurological disorder during childhood, such as epilepsy, intellectual disability, learning disorders and neuropsychiatric conditions (such as autism or ADHD), or movement disorders (such as dystonia or Parkinson's), according to several studies published in scientific journals. This was the focus point for the final B·Debate of the year, entitled “Connecting the Growing Brain. Understanding Neuropaediatric Diseases”.

“Intellectual, behavioural and movement disorders affect children's brains as a whole”, explained Dr. Àngels Garcia-Cazorla, scientific leader of the B·Debate and coordinator of the Neurometabolic Unit at the Sant Joan de Déu Hospital, when talking about about children's still-developing brains in comparison to adult brains, which are divided into different areas.

Experts from around the world met at CosmoCaixa to discuss neuropaediatric diseases based on synaptic connections, the links between neurons that transfer information to the brain. Any interference in this process can determine abnormal circuits that might result in a neurological disease, which might also manifest itself in other symptoms. For example, diseases as diverse as Parkinson's and attention deficit hyperactivity disorder (ADHD) share similar mechanisms in the brain, where dopamine function is not normal in the synapses. A single genetic mutation can cause two members of the same family to have autism or epilepsy.

"The fact that we are finding out more about neurological diseases based on their main symptoms means that we don't consider that different symptoms may have similar molecular mechanisms, which also limits possibilities for treatment", notes Dr. Garcia-Cazorla. There are currently no standardised treatments for each disease, without medical professionals having a thorough understanding of their pathophysiology.

Garcia-Cazorla highlights the huge investment in neurological diseases suffered by adults, such as Alzheimer's and other degenerative diseases, in comparison to illnesses that affect children. The scientists who took part in the debate stressed the need to continue working towards synaptic markers, through neuroimaging and other analytical techniques, to develop new treatments and even work on a neonatal screening program. Similar to screening for congenital metabolic diseases, such a program would provide an early diagnosis for children who are at risk of developing a neurological disorder, so that they could be treated earlier, or even stop the condition from developing.

The seminars were presented on Thursday by Dr. Garcia-Cazorla, as well as: the Director of Research and Knowledge at ‘La Caixa’ Foundation, Jordi Portabella; the Head of Research and Scientific Debate at Biocat, Laia Arnal; professor of biomedicine at the University of Bergen, Aurora Martinez; and professor of physiology and neuroscience at New York University and an expert on ADHD Xavier Castellanos, who noted this was "an opportunity" to further knowledge, but that progress would be achieved through sharing data.