Type 1 diabetes, which mainly affects children and teens, may be curable in the future

A group of 25 experts, which are meeting today and tomorrow in Barcelona, stand out for their use of innovative therapies like stem cells, regenerative medicine and immunotherapy 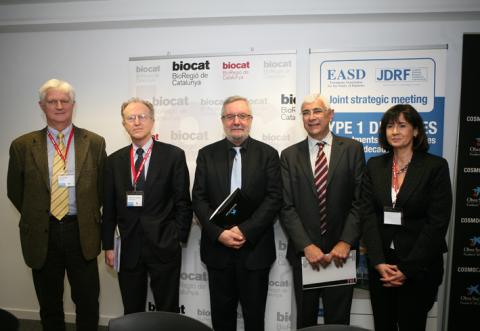 The number of people suffering from type 1 diabetes has grown in recent years in Europe and the rest of the world, with an increase in the number of cases seen in children. A total of 285 million people around the world are affected by diabetes and this figure is expected to reach 435 million by 2030.

With the aim of finding a cure to this disease and treating it, global experts in the field are meeting today, Thursday 18 and Friday 19 November, at CosmoCaixa in Barcelona for the symposium entitled Joint strategic meeting. Type 1 diabetes. New treatments and strategies for the new decade. This symposium is organized by the International Center for Scientific Debate (ICSD) —driven by Biocat and “la Caixa” Welfare Projects— in conjunction with the European Association for the Study of Diabetes (EASD), the Juvenile Diabetes Research Foundation (JDRF), the Center for Animal Biotechnology and Gene Therapy (CBATEG–UAB) and the Biomedical Research Center in Diabetes and Associated Metabolic Disorders (CIBERDEM).

The symposium, which has brought together a total of 25 expert speakers from the field and some thirty up-and-coming young researchers from Catalonia and the world, aims to encourage the use of innovative therapies to treat type 1 diabetes using stem cells, gene therapy, regenerative medicine and immunotherapy, as well as establishing a strategic plan for future research.

According to the director of the CBATEG, Fàtima Bosch, this meeting “will provide a framework through which researchers can develop cutting-edge therapies to benefit all those affected”.

Philippe Halban pointed out that “the event is a meeting where participants will focus more on what research should be like in the future and less on what has been done so far”.

Diabetes is a chronic disease that affects all the organs in the human body. There are two types of diabetes: type 1 and type 2. Type 1 diabetes is an autoimmune disease in which the pancreas stops producing insulin, the hormone that allows the body to obtain energy from food. Type 1 diabetes appears mainly during childhood, adolescence and young adulthood, and is a life-long disease. Type 2 diabetes is a metabolic disorder in which the human body produces insulin but can't use it efficiently to obtain energy from food. It is normally diagnosed in adults and does not always need to be treated with insulin injections. However, increased levels of obesity in some segments of the population has led to an increase in type 2 diabetes among young people.

Diabetes affects some 410,000 people in Catalonia

Diabetes affects nearly 24 million Americans (7.8% of the population), according to the JDRF, and 55.2 million Europeans, according to data from the International Diabetes Federation. In the USA, more than 1.6 million people are diagnosed with some type of diabetes each year, while in Europe in number reaches 17.1 million. Experts warn that only by stepping up global research, in which Europe plays a key role, will we be able to find a cure for this disease.

Insulin is the main treatment for diabetes but does not cure this disease that can lead to kidney failure, blindness, heart disease, amputations, stroke, and complications during pregnancy (diabetics are twice as likely to suffer from these afflictions as those without diabetes). In some cases, it can reduce life expectancy by 7 to 10 years.

Limited access to insulin in underdeveloped countries can lead to severe problems and even premature death in diabetic children.

In Catalonia, the estimated total for people with diabetes is around 410,000 (according to the 2006 Catalonia Health Survey, carried out by the Government of Catalonia). The Catalan type 1 diabetes register, which was initiated in 1987, provides information regarding the age of onset in children and young people. Between 130 and 150 children and young people under 14 are diagnosed with type 1 diabetes each year.

According to experts, “while clinical and research efforts need to improve the existing therapeutic strategies, there is also considerable need for new, alternative diabetes treatments”.

Sunday14 November was World Diabetes Day. The World Health Organization and the International Diabetes Federation celebrate this day in order to raise awareness of the reach, characteristics and possible consequences of this disease among diabetics, healthcare professionals and society in general. They also seek to draw attention to the benefits and positive repercussions of appropriate treatment and control, as well as a healthy lifestyle.