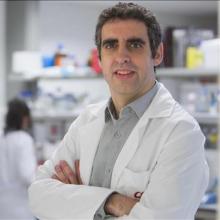 Manel Esteller (Sant Boi de Llobregat, Barcelona, Catalonia, Spain, 1968) graduated in Medicine from the Universidad de Barcelona in 1992, where he also obtained his Ph.D. degree specialising in molecular genetics of endometrial carcinoma, in 1996. He was an Invited Researcher at the School of Biological and Medical Sciences at the University of St. Andrews, (Scotland, UK) during which time his research interests focused on the molecular genetics of inherited breast cancer. From 1997 to 2001, Esteller was a Postdoctoral Fellow and a Research Associate at the Johns Hopkins University and School of Medicine, (Baltimore, USA) where he studied DNA methylation and human cancer. His work was decisive in establishing promoter hypermethylation of tumour suppressor genes as a common hallmark of all human tumours. From October 2001 to September 2008 Manel Esteller was the Leader of the CNIO Cancer Epigenetics Laboratory, where his principal area of research were the alterations in DNA methylation, histone modifications and chromatin in human cancer. Since October 2008, Dr Esteller is the Director of the Cancer Epigenetics and Biology Program (PEBC) of the Bellvitge Institute for Biomedical Research (IDIBELL) in Barcelona, Chairman of Genetics in the School of Medicine of the University of Barcelona, and an ICREA Research Professor. His current research is devoted to the establishment of the epigenome and epitranscriptome maps of normal and transformed cells, the study of the interactions between epigenetic modifications and non-coding RNAs, and the development of new epigenetic drugs for cancer therapy.
Author of 503 original publications in peer-reviewed scientific journals, 24 of them categorized as “Highly Cited Paper” by Thomson Reuters. Dr Esteller has a Total Impact Factor of 4,508.212 and a Total Number of Citations of 58,860, having an h-Index of 119. He is also a Member of numerous international scientific societies, Editorial Boards and reviewer for many journals