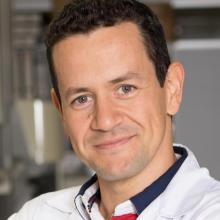 Dr. Manuel Sánchez-de-la-Torre recieved his degree in Biology in 2003 in the University of Jaen, (Jaén, Spain), and his PhD in Biology from the University of Lleida (Lleida, Spain), in 2007. In his thesis work he evaluated the impact of host genetic variation on infection with HIV-1. After completing his PhD, he accepted a position as research coordinator in the Traslational Research in Respiratory Medicine group at the IRB Lleida and Biomedical Research Networking Center Consortium for Respiratory Diseases (CIBERES, Madrid, Spain), a group leaded by Dr. Ferran Barbé. He also performed a research fellowship at the group leaded by Dr. David Gozal, at the University of Chicago. During his fellowship Dr. Sánchez-de-la-Torre pioneered the precision medicine in sleep apnea and hypertension, developing a microRNA based system that predicts clinical response to sleep apnea treatment. In 2008, Dr. Sánchez-de-la-Torre accepted an Associate Professor position at the University of Lleida, where he has been since that time. In 2015, he accepted the National Coordination in Sleep in CIBERES. Dr. Sánchez-de-la-Torre obtained the Young Researcher of Spanish Respiratory Society (SEPAR) award in 2016, the Best original publication in Sleep Society award in 2015, and the Young Researcher Award of Astra-Zeneca Foundation in 2016. Manuel Sánchez-de-la-Torre ́s work focuses on sleep apnea. His research aims to achieve a better understanding of the pathogenesis of the cardiovascular consequences for sleep apnea patients, to evaluate new diagnostic and therapeutic options in such patients, and developing of precision medicine in sleep apnea. Manuel Sánchez-de-la-Torre has had 66 papers published in peer-reviewed journals; these papers have received over 800 citations.