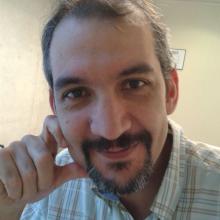 Graduated in Biological Sciences (Biochemistry) by the Universitat de València in 1990 I received my PhD in Genetics from that same university in 1995 under the supervision of Profs. Andrés Moya and Esteban Domingo. During my thesis, I worked on the experimental evolution of RNA viruses, specifically in the effect of accumulation of deleterious mutations and dynamics of compensatory evolution. After a postdoctoral stay in the laboratory of Prof. Richard E. Lenski (Michigan State University) working on the experimental evolution of bacteria and on evaluating the impact of epistasia on the architecture of fitness, I joined the U. de València Department of Genetics as an Assistant Professor, where in 2001 I was promoted to Associate Professor of Population Genetics. In 2002 I changed the University for the CSIC and joined the Instituto de Biología Molecular y Celular de Plantas as a Scientific Investigator. In 2005 I was promoted to CSIC full Professor. Since I joined the CSIC, I has been working on the experimental evolution of plant RNA viruses and the systems biology of virus-host interactions. Throughout my career, I have published more than 230 papers in journals in the areas of evolutionary biology, virology and systems biology, contributed more than 250 communications to congresses and gave more than 80 invited seminars in institutions around the world. I have directed 20 PhD theses and have been principal investigator for 18 national and international grants. Among other merits, I was elected EMBO Young Investigator in 2004, awarded as Young Virologist by the Spanish Society of Virology in 2006, elected external professor of the Santa Fe Institute (New Mexico, USA) in 2008, elected EMBO Member in 2011, and elected Professor of the Chinese Academy of Agricultural Sciences in 2018.