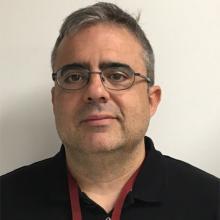 Alejandro Vaquero (Barcelona, 1971) received his PhD from the University of Barcelona (UB) for his work on Drosophila GAGA factor on transcription. He performed his postdoctoral stage in Dr Danny Reinberg’s lab (HHMI, USA) pioneering the study of the role of the mammalian NAD+-dependent deacetylases Sirtuins, in chromatin dynamics upon stress. His work demonstrated a key role for SirT1 in global chromatin organization (Mol Cell, 2004; Nature, 2007), the first direct link between Sirtuins and cancer (PNAS, 2006) and a role for SirT2 in H4K16Ac regulation during mitosis (Genes Dev 2006). In 2006, Dr Vaquero returned to Spain as ICREA Researcher at the IBMB-CSIC institute, and in 2008 he established his laboratory at the Bellvitge Biomedical Research Institute (IDIBELL) in Barcelona), within the Cancer Epigenetics and Biology Program (PEBC). Vaquero’s group aims to understand the role of Sirtuins in the regulation of genome stability in response to stress, and their implication in cancer and aging. Over the years, the lab has described relevant epigenetic-dependent mechanisms involved in genome stability protection such as the role of SIRT1 in Suv39h1 stability and heterochromatin dynamics (Mol Cell, 2011), the key role of SIRT2 in the deposition of H4K20me1 in G2/M transition (Genes & Dev, 2013), SIRT6-dependent control of NF-kB signaling through cysteine ubiquitination (Nat Commun, 2018), and a distinctive role for HP1 isoforms in heterochromatin dynamics (Epigenetics, 2017, Cell Rep, 2018). The lab has also contributed to uncovering the role of SirT7 in DNA repair and aging (EMBOJ 2016) and its functional interplay with SirT1 (PNAS, 2017), the discovery of the embryonic histone H1 bigH1 in Drosophila (Dev. Cell 2013), and a functional link between AID and H4K20me3 in class-switch recombination (Sci Reports 2017).