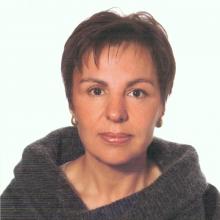 Amalia Diéguez Ramírez, was born in Hospitalet, Barcelona in 1960. She holds a degree in Philosophy from the Bellaterra University and in Social Work by UNED in 2010. ABI Affected by a cerebral hemorrhage since 1990. Founder member of the ABI Association-Foundation, ATEN3O CASTELLÓN, being Director since 2004.

At the moment, she focuses mainly on the defense of the rights of the people and families, women and girls with Brain Injury. She is a member of the Social Council of the Guttmann Institute, of the Executive Committee of the Valencian Disability Representatives Committee, Board member of CERMI Women Foundation.

As board member of the European ABI Federation, BIF, she works in recognition by WHO of the ABI as a specific disease and disability and in promoting the study and research on cognitive disability. Last July and after the approval of the Strategy of Brain Damage Acquired in the Valencia Community, has been named representative of the associative movement before the Commission of Coordination of the Networks DCA in the Valencian Community.

During these years he has promoted the incorporation of new technologies in the processes of neurorehabilitation and promotion of autonomy and social inclusion of people with ABI, collaborating in the development, test and adaptation of software and platforms such as: Previnec (Guttmann), Neuronab, Mfacilyta (Vodafone), Live Free (Movistar), Support Looks. As well as in the use of alternative or augmentative systems such as Grid, In Print, Smart Brain, or Rehacom.