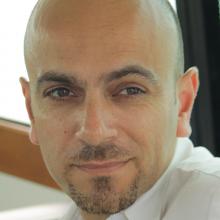 Professor Antoniou studied at the London School of Economics and Political Science and the University of Cambridge before gaining his PhD in Genetic Epidemiology at Cambridge in 2001. In 2009 he was awarded a Cancer Research UK Senior Fellowship to establish an independent research group. In 2013 he was appointed a Reader in Cancer Risk Prediction and was promoted to Professor of Cancer Risk Prediction in 2017. He currently leads a research group within the Department of Public Health and Primary Care and he is the Academic Course Director for the MPhil in Epidemiology.

Professor Antoniou’s main research is the development and application of statistical modelling techniques for addressing clinical questions, and the development of risk prediction tools which are used in clinical practice.

Professor Antoniou heads up a research group of 10 which focuses on two broad areas: (1) The development and evaluation of risk prediction models for familial breast, ovarian, prostate and other common cancers. (2) The characterisation of cancer risks for genetically susceptible individuals, such as those carrying mutations in the the BRCA1, BRCA2, PALB2, RAD51C and RAD51D genes.

CanRisk Programme, which aims to develop and validate quantitative tools for cancer risk stratification and prevention that take advantage of discoveries in both cancer genomics and epidemiology; the development of the BOADICEA risk prediction algorithm which can be used for predicting the risk of developing breast or ovarian cancer and the likelihood of carrying mutations in high risk genes; investigation of genetic moodifiers of breast, ovarian and prostate risk for BRCA1 and BRCA2 mutation carriers using data from the Consortium of Investigators of Modifiers of BRCA1/2 (CIMBA).