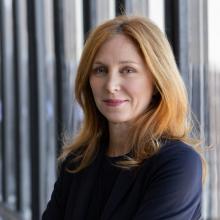 Francesca Rossi is a distinguished research scientist at the IBM T.J. Watson Research Centre, and an professor of computer science at the University of Padova, Italy, currently on leave.
Her research interests focus on artificial intelligence, specifically they include constraint reasoning, preferences, multi-agent systems, computational social choice, and collective decision making. She is also interested in ethical issues in the development and behaviour of AI systems, in particular for decision support systems for group decision making. She has published over 170 scientific articles in journals and conference proceedings, and as book chapters. She has co-authored a book. She has edited 17 volumes, between conference proceedings, collections of contributions, special issues of journals, as well as the Handbook of Constraint Programming.  She has more than 100 co-authors.
She is a AAAI and a EurAI fellow, and a Radcliffe fellow 2015. She has been president of IJCAI and an executive councillor of AAAI. She is Associate Editor in Chief of JAIR and a member of the editorial board of Constraints, Artificial Intelligence, AMAI, and KAIS. She co-chairs the AAAI committee on AI and ethics and she is a member of the scientific advisory board of the Future of Life Institute. She is in the executive committee of the IEEE global initiative on ethical considerations on the development of autonomous and intelligent systems and she belongs to the World Economic Forum Council on AI and robotics.
She has given several media interviews about the future of AI and AI ethics (including to the Wall Street Journal, the Washington Post, Motherboard, Science, The Economist, CNBC, Eurovision, Corriere della Sera, and Repubblica) and she has delivered three TEDx talks on these topics.