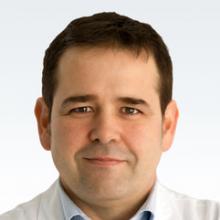 Dr. Jose M Tomos Muñoz is MD and PhD by the University of Valencia. His doctoral thesis was aimed to study the parameters of noninvasive brain stimulation for modulating cortical excitability and modulation design strategies to optimize rehabilitation outcomes. He was pre a post doctoral researcher affiliated to the Berenson-Allen Center for Noninvasive Brain Stimulation, under the direction of Prof. Alvaro Pascual-Leone, at Harvard University. Between 1999 and 2003 he was Associate Professor of the Department of Medicine at the University of Valencia. In his work he has demonstrated the noninvasive brain stimulation in the treatment of depression, aphasia rehabilitation and treatment of movement disorders such as Parkinson's stiffness, focal dystonia, or idiopathic scoliosis.

He is author of over 60 scientific articles on subjects related to neuronal plasticity and strategies for assessment and modulation of the plastic changes in clinical settings, aimed at optimizing the result of interventions in neurorehabilitation, and is co-author of 4 patents in the field of neurotechnologies.