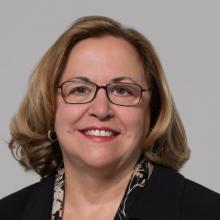 Her research activities focus on cardio-metabolic diseases, thrombosis, atherosclerosis and ischemic heart disease. She has published over 550 articles in highly qualified scientific journals with her work highly quoted in the scientific literature (Citations: 37.588; h‐index 75). She has written more of 250 reviews and book chapters

Previous appointments include: Fellow in Cardiovascular Diseases at The Mayo Clinic, Rochester, MN, USA (1981‐1983); Director of the Cardiology Basic Research Laboratory of the Division of Cardiology at the Mount Sinai Medical Center, New York, NY (1983‐1991); Assistant Professor of Medicine (1983‐1987) and Associate Professor of Medicine (1988‐1991) at the Mount Sinai School of Medicine, NY; Lecturer in Medicine at Harvard Medical School, Boston (1991‐1994); Consultant at the Cardiac Unit, at the Massachusetts General Hospital, Boston (1991‐1994)

Positions of Trust: Vice-President for Scientific Affairs of European Society of Cardiology (2016-2018), Vice‐President of the Spanish Society of Cardiology (2013‐2015); Chairman of the Council on Basic Cardiovascular Science (2014‐2016) and Chairman of the Working Group on Microcirculation (2012‐2014) of the ESC; Past‐President of the European Society for Clinical Investigation (2000‐2002) and Past‐President of the Spanish Society of Atherosclerosis (1996‐2000); Member of the National Academy of Medicine and of the National Academy of Pharmacy of Catalonia and Spain.