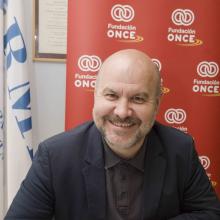 Luis Cayo Pérez Bueno is President of the Spanish Committee of Representatives of Persons with Disabilities (CERMI). He has studied law, specializing in moral and legal philosophy, with a master's degree in business management by the Free School of Law and Economics. Since 1995, he has worked in the social sector of disability. Vice-President of the National Council of Disability, Member of the Royal Board on Disability and the State Council of Social Action NGOs. He is president of CERMI Women Foundation, Foundation Law and Disability and Bequal Foundation, vice president of Platform of the Third Sector and patron of ONCE Foundation, ONCE Latin America Foundation and Vodafone Spain Foundation. Writer, translator and poet, he has published works, studies and translations of both literary creation as well as social reality and the disability movement, emphasizing the dismantling of the incapacity and other hesitant writings, published by ElCobre Ediciones. He published “Disability in the Social Security System. Improvement proposals” (2009) and “Disability, Law and Inclusion Policies” (2010). He directed, among others, the collective works “Law, Third Sector and Social Inclusion” (2010), “2003-2012: 10 years of non-discrimination legislation in Spain” (2012) and “Civil Society, social inclusion and foundational sector in Spain” (2014) and “Comments to the Laws of the Third Sector of Social Action and Volunteering-vol I” (2016). Member of Spanish Chapter of Club of Rome. Prize Gold Master of Top Management Forum 2007. In 2008, he was awarded by Ministry of Justice Distinguished Cross of Order of St. Raimundo de Peñafort, to the merit in Law and Justice. In 2011, Government of Spain, through Ministry of Health, Social Policy and Equality, awarded the Gold Cross of the Civil Order of Social Solidarity. Newspaper EL MUNDO.es included him in the list of the 500 most influential Spaniards from 2010 to 2014, in the field of "alternative power".