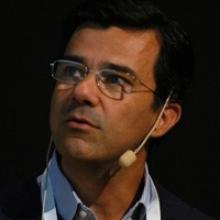 Marcello Pelillo is Professor of Computer Science at Ca’ Foscari University in Venice, Italy, where he directs the European Centre for Living Technology (ECLT) and the Computer Vision and Pattern Recognition group. He held visiting research positions at Yale University, McGill University, the University of Vienna, York University (UK), the University College London, the National ICT Australia (NICTA), and is an external affiliate of the Department of Computer Science at Drexel University (USA). He has published more than 200 technical papers in refereed journals, handbooks, and conference proceedings in the areas of pattern recognition, computer vision and machine learning.

He is General Chair for ICCV 2017, Track Chair for ICPR 2018, and has served as Program Chair for several conferences and workshops, many of which he initiated. He serves (has served) on the Editorial Boards of the journals IEEE Transactions on Pattern Analysis and Machine Intelligence (PAMI), Pattern Recognition, IET Computer Vision, Frontiers in Computer Image Analysis, Brain Informatics, and serves on the Advisory Board of the International Journal of Machine Learning and Cybernetics.

His interest in the philosophical aspects of machine learning and pattern recognition has recently led him to run several initiatives devoted to this topic, among which a workshop at NIPS in 2011, a special issue of Pattern Recognition Letters (2015), and several tutorials at conferences and summer schools (e.g., ICPR 2014, ICPR 2016, ECML 2016, IbPRIA 2017).

He is (or has been) scientific coordinator of several research projects, including SIMBAD, an EU-FP7 project devoted to similarity-based pattern recognition whose activities are described in a Springer book, and has recently won an award from the Samsung Global Research Outreach (GRO) program.