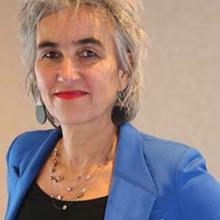 Professor Marion Koopmans, DVM PhD focuses on global population level impact of rapidly spreading zoonotic virus infections, with special emphasis on foodborne transmission. Her research focuses on unravelling the modes of transmission of viruses among animals and between animals and humans, and the use of pathogenic genomic information to unravel these pathways and to signal changes in transmission or disease impact. As initiator of the global Noronet network (www.noronet.nl ), she has developed a global network of scientists sharing information on disease outbreaks into a jointly owned database to study norovirus diversity related to human health impact. Building from the norovirus work and molecular epidemiological expertise, she has expanded her research into emerging viral diseases that are recognized with increasing frequency. As head of the virology reference laboratory of the national public health laboratory, a position she held from 2001 to 2014, she has been responsible for emerging disease preparedness, and coordination of the national laboratory response to such disease outbreaks, including SARS, pandemic influenza H1N1 2009, avian influenza and MERS. Building from those experiences, she developed an academic emerging disease preparedness research agenda at Erasmus MC as head of the Department of Viroscience. She has obtained funding for the research activities, both academic and in a public health setting, from various sources including European FP6, FP7 and H2020 programs, US CDC, WHO, Wellcome trust, NOW and ZONMW, the latter with funding specifically to develop insights into EID detection through the use of novel technologies that also will be central to this grant application. She is scientific coordinator of COMPARE, a large H2020 funded project (20 MEuro), exploring potential uses of next generation sequencing techniques for outbreak detection and tracking (www.compare-europe.eu ).She was awarded the Æresdoktor 2017, an honorary doctorate at DTU.