Antimicrobial resistance leads to 25,000 deaths and €1,500 millions in losses each year in Europe

In the past 30 years, only two new classes of antibiotics have been developed, explained experts and scientists at the B·Debate and ISGlobal scientific debates in Barcelona 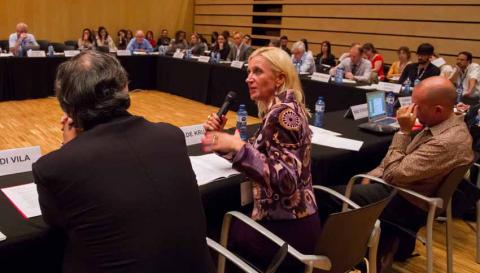 According to the European Center for Disease Prevention and Control (ECDC), 25,000 people die each year in Europe as a result of multiresistant microorganisms and their impact in additional healthcare costs is at least €1,500 millions.

An estimated 4 million patients catch hospital infections in the European Union each year, with the risk of them being multiresistant organisms. Nevertheless, “many of the resistances come from outside the hospital, but act like Trojan horses inside,” says Dr. Jesús Rodríguez-Baño, one of the speakers at the international scientific debate The Global Threat of Antimicrobial resistance. Science for Intervention held by B·Debate and the Barcelona Institute for Global Health (ISGlobal) in Barcelona from 5 to 7 November. The Spanish Society of Community Pharmacy (Sefac) calculates that 85% of antibiotics consumed in Spain are outside of the hospital setting, above all to treat respiratory infections.

Antimicrobials are used for both human and veterinary medicine, as well as for non-therapeutic purposes like disinfectants, preservatives and food additives. For example, bacteria that cause diarrhea or respiratory infections in various animal species have become resistant to veterinary antimicrobials, which leads to increased suffering and death in animals and, as a result, production losses and additional costs. It also increases work-related risks of those caring for animals, as they act as a reservoir for these microorganisms and can make humans sick.

According to the latest Eurobarometer on antimicrobial resistance, 50% of all Europeans still believe that antibiotics are effective against viruses. The need to inform the population about proper use of antimicrobials is clear. One of the decisive factors in creating new resistance is inappropriate use of antimicrobials, as are overuse, underuse and self-medication. In order to raise awareness as to the need to take the right doses of the right antimicrobial drugs and discourage self-medication, prescribing healthcare professionals, pharmacists, the pharmaceutical industry and regulatory agencies must all intervene.

In the words of Dr. Jordi Vila, scientific leader of this B·Debate, "the pharmaceutical industry isn’t investing as much as is needed to research new antimicrobials for economic reasons." Over the past 30 years, only two new classes of antibiotics have been developed "It is much more profitable for these companies to manufacture cholesterol medicine,” says Vila, as patients have to take these drugs for long periods of time, instead of antimicrobials that are taken for a short time with the added complication of resistance.

The scientific leader of this B·Debate believes it is necessary for governments to change the criteria to incentivize research into new antibiotics in the pharmaceutical industry. One example could be extending patent coverage in order to allow companies to get better return on their investment in these drugs. Regarding research, innovative technology in chemistry and molecular biology opens the door to obtaining new antimicrobial agents.

The challenge is complex and must be tackled on a global level, taking into account issues like the diversity of healthcare systems in different countries. According to Dr. Betuel Sigauque, senior researcher at the Manhiça Health Research Center (CISM) in Mozambique, problems related to antimicrobial resistance in developing countries are much worse than data indicates. In many of these countries, with inadequate healthcare systems, antibiotics that reach the general population may be of low quality and it is difficult to ensure they are taken for the prescribed length of time, leading to new resistance. Dr. Sigauque added that in a globalized world, bacterial infections know no borders, making it more important than ever to collaborate globally on this subject.

These scientific debates aimed to help tackle this global health challenge, bringing together more than 60 national and international experts in Catalonia.