B·Debate brings together more than 200 cancer and epigenetics experts, researchers and professionals each year 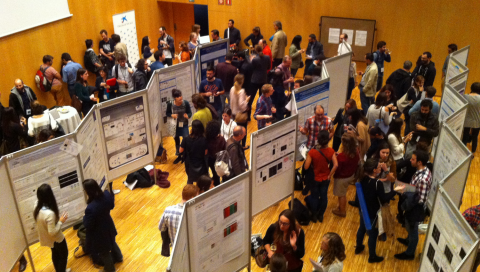 On 13 and 14 October, CosmoCaixa is welcoming national and international experts in epigenetics and cancer called together by B·Debate, an initiative of Biocat and the "la Caixa” Foundation, to debate genetic and epigenetic regulation of cancer at the fourth edition of the Barcelona Conference on Epigenetics and Cancer (BCEC), which in previous years has brought together more than 200 oncology experts, researchers and professionals.

This year's event is led by Eduard Batlle, Salvador Aznar-Benitah and Raúl Méndez of the Institute for Research in Biomedicine (IRB Barcelona), with collaboration from the Molecular Biology Institute of Barcelona, Institute of Predictive and Personalized Medicine of Cancer, Cancer Epigenetics and Biology Program (PEBC; IDIBELL) and the Center for Genomic Regulation (CRG).

The event will feature top-notch scientists, including John Dick, a researcher at the University of Toronto (Canada) who discovered cancer stem cells (it was previously believed that tumor cells were all the same).

The sessions will also include Rick Young, a researcher at the Massachusetts Institute of Technology (USA) and a pioneer in three-dimensional architecture of genes and chromosomes. His name always comes up amid speculation about who will win the Nobel Prize in medicine.

Treatment for cancer patients is increasingly personalized, but it is still a challenge to understand how tumor cells behave during some key processes like metastasis and therapy resistance. In recent years, researchers have become interested in how lifestyle can influence the onset of an oncological pathology, including eating habits, smoking and a sedentary lifestyle. This new level of cell regulation is known as epigenetics and it has broadened the scope of cancer studies and treatments derived from them.

Within this framework, national and international experts will debate the latest advances in oncology, including epigenetic regulation, RNA transcription factors, stem cell biology and the microenvironment inside tumors