Josep Casacuberta: “We feed ourselves with species invented by human beings, which are the fruit of genetic modifications” 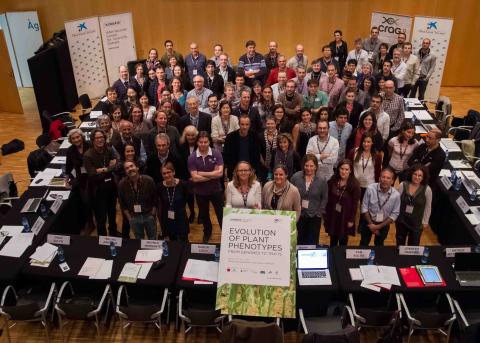 Genetic improvement of plants is key to addressing future food needs. This is one of the conclusions that can be extracted from the debate sessions held at Cosmocaixa by B·Debate, International Center for Scientific Debate –an initiative of Biocat and the “la Caixa” Foundation– which brought together top global experts in agrigenomics.

This edition of B·Debate, entitled Evolution of plant phenotypes. From genomes to traits, focused on understanding the evolutional mechanisms of plants in order to select the traits from their genomes that can impact all sorts of improvements, from sensory traits like touch, smell and taste, to nutritional quality and preservation of these food products

Josep Casacuberta, scientific leader of this B·Debate and coordinator of the plant and animal genomics program at the Center for Research in Agricultural Genomics (CRAG), says: “We feed ourselves with species invented by human beings, which are the fruit of genetic modifications.” Before, these changes to plant varietals were carried out intuitively. Now, thanks to scientific research, there are many more precise improvement techniques, like marker-assisted selection and genetic modification.

On genetic modification, the Parliament of Catalonia has launched a Subcommittee for the Study of GMOs, which falls under the Committee on Agriculture, Livestock and Fishing, to debate implementing and farming GMOs in Catalonia.

According to the Food and Agriculture Organization of the United Nations (FAO), food production will have to increase 70% by 2050 to feed the world population, so, over the coming 50 years we will have to produce more food than we’ve farmed in all of the history of humanity. Over the past half century, the world population has doubled and production has increased mainly by using more farmland, water and fertilizers. However, as Josep Casacuberta explains, “This isn't possible anymore, which means we have to use all of the tools available, like improvements in the basic knowledge of plant genetics.”

One of the challenges for the future of agrigenomics is to create more efficient plant varietals in order to boost production without investing additional resources like space, water and fertilizer in a context of climate change that makes farming increasingly difficult.