CosmoCaixa hosted an international event on the microbiome to debate its effect on diet, allergies, cancer and AIDS 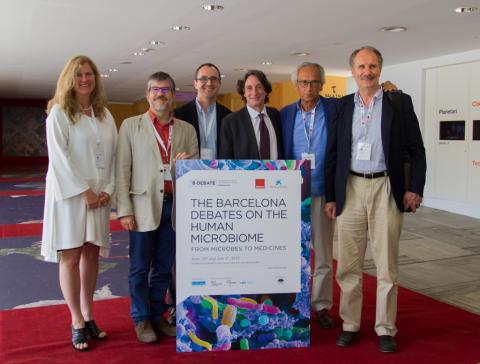 The microbiota, made up of billions of microorganisms like bacteria, viruses and fungi, can have an important impact on our health and influence how our body reacts to cancer or AIDS treatments. This is why a person’s first years of life are a great opportunity to introduce changes and prevent these problems.

For newborns, the lack of some bacteria can increase their risk of developing asthma. This has been proven in a recent study led by Stuart Turvey, professor of pediatrics at the University of British Columbia (Canada).

After monitoring 5,000 children, the study has proven that babies that experience alterations in four types of intestinal bacteria over their first 100 days of life are at a higher risk of developing asthma, a disease that affects 300 million people worldwide. “In the laboratory, administering these types of bacteria that they are missing seems to reduce their risk of developing asthma, but we don’t know for sure,” says Turvey.

This is one of the new developments regarding the microbiome that were announced at an international event organized by B·Debate, an initiative of Biocat and the "la Caixa" Foundation along with the IrsiCaixa Institute for AIDS Research, which took place at CosmoCaixa on 30 June and 1 July.

The make-up of a child’s microbiome is highly relevant to their health through adulthood. Research still has a long way to go, but some of the latest advances were shared at the debate. Kjersti Aagaard, associate professor at the Baylor College of Medicine, is the first researcher to identify a community of bacteria in the placenta. “Unlike what we previously thought, the placenta isn’t sterile and seems to have a greater impact on the child’s microbiome than the way they are born,” explains Aagaard.

We previously believed that babies began to acquire their microbiota from their mother at birth, but Aagaard has shown that the mother’s diet during pregnancy can change the child’s microbiome and propensity to anxiety.

These new studies help design new early-detection tests (for asthma, for example) and new probiotic treatments. While research is moving forward, experts are clear, “We must control the use of antibiotics because they are a risk factor,” said Turvey with regard to asthma.

The debate highlighted other topics tied to the microbiota, like HIV infection and cancer. Roger Paredes, one of the scientific leaders of the debate and a researcher at IrsiCaixa, explained that HIV patients have a less varied microbiota. “Restoring it could help curb the progress of the disease,” he said. Regarding cancer, Laurence Zitvogel of Institut Gustave Roussy spoke of what have been called oncomicrobiotics: microbes that can have an effect on the use of chemotherapy to fight cancer.