How can we justify crimes committed by psychopaths? New neuroimaging techniques allow us to identify the differences among people with mental disorders that alter their ability to act correctly 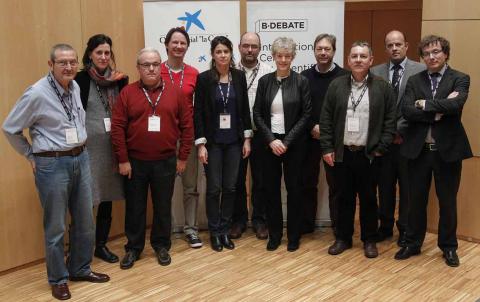 "Criminality is a public health problem in the United States, costing $2.4 billions each year. This disease has genetic and epidemiological causes, but we don’t yet how this biochemistry leads to antisocial behavior,” explained Joshua W. Buckholtz, professor in the Harvard University Department of Psychology, at the B·Debate session Neuroethics: from Lab to Law. A Scientific Scrutiny of Sociability, Responsibility and Criminality held at CosmoCaixa Barcelona on 12 and 13 November.

Buckholtz is one of the 17 national and international experts that discussed the latest breakthroughs in neuroethics, a discipline that combines the ethics of neurobiology and neurobiological aspects of ethical behavior. The first session in the scientific debates focused on psychopathic and antisocial behavior, perceptions of justice and criminality, and current knowledge on the genetic and environmental causes that predispose people to criminal behavior. One of the elements that generated the most debate was the role of the MAO-A gene (often called the warrior gene), which deanimates dopamine, a neurotransmitter often associated with aggressive behavior.

Joshua W. Buckholtz: "This disease has genetic and epidemiological causes, but we don’t yet how this biochemistry leads to antisocial behavior”

“Psychopaths know the difference between right and wrong, but they don’t care,” said Adolf Tobeña, director of the Department of Psychiatry and Forensic Medicine at the Autonomous University of Barcelona (UAB) and scientific leader of these debates with Òscar Vilarroya, director of the UAB “Social Brain” Chair. During his conference, Dr. Tobeñava gave various examples of how people modify their ethical behavior depending on the prevailing rules in their surroundings. When these rules are not well established, people tend to behave worse and to break them. It has also been observed that values change in clinical cases in which trauma, a tumor or a congenital defect has modified brain morphology.

Molly Crockett, who researches how real-time changes in brain chemistry have a direct effect on social and moral behavior at the University of Cambridge (United Kingdom), explained that “serotonin modulates moral judgment and social behavior. The same neurotransmitter also seems to promote an aversion to evil and a preference for retaliation.” Crockett has shown that substances like atomoxetine and citalopram can lower serotonin levels in the brain and lead to a relaxing of moral judgment, so that things a person would consider inacceptable under normal circumstances seem morally acceptable under the effects of these drugs.

The second session of the scientific debates dealt with the convergence of advances in neuroscience and legislation of criminal acts and the need for collaboration between these two disciplines. The debate posed dilemmas like how to judge a crime committed by a psychopath, the raison d'être of a suicide terrorist and other problems that concern current neuroscience. Breakthroughs in neurobiology techniques are giving us new perspectives on the study of the cognitive mechanisms of religious thought and human cooperation. Thus, this knowledge brings new focus to a wide range of disciplines including psychiatry, evolutionary psychology, anthropology and criminal law.

In this sense, Scott Atran, research professor at the University of Michigan and director of the National Scientific Research Center in Paris, said “there is no specific profile of a suicide terrorist; their motivations are random. It is important that schools offer alternative dreams and role models for young people. We know a lot about decision-making in an economic context, but very little about morally motivated behavior.”

Working from the base that “no human culture exists that doesn’t have some sort of religious expression,” according to Sabela Fondevila, researcher at the Complutense University of Madrid-Carlos III Health Institute, these centers are trying to find cognitive mechanisms for the evolution of religious thought.

The following reports include the most noteworthy declarations from the speakers:

After the scientific debates, an open debate entitled Neuroethics: decoding the root of good and evil was held, allowing the audience to debate with the experts on topics like the clinical aspects of human evil and the sociological and cultural roots of suicide terrorism carried out by groups like Al-Qaeda.