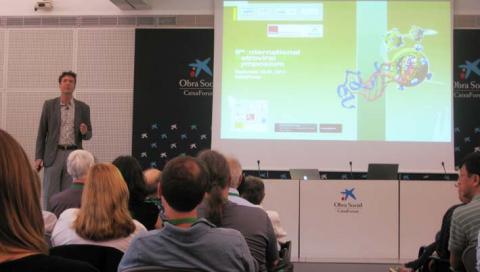 Nearly one hundred retrovirus researchers from 17 countries are meeting at the CaixaForum in Barcelona from 18 to 21 September for the eighth International Retroviral NC Symposium to share the latest results and ideas related to retroviral NC. Nucleocapsid proteins are central to retrovirus replication, causing diseases like AIDS or the flu, and the fact that they mutate constantly makes it difficult to treat these illnesses.

This event, which is held every two years and has alternated between Europe and North American since 1997, has received collaboration from the International Center for Scientific Debate (ICSD). The ICSD is an initiative of Biocat driven by "la Caixa” Welfare Projects.

International experts in virology, cellular biology, biophysics, structural biology, genetics, biological chemistry and molecular pharmacology will meet in Barcelona to share the latest breakthroughs in their research and seek out new lines of international collaboration to accelerate progress in the study and exploitation of these proteins applied to antiviral therapies. Different lines of research are currently being worked on, focusing on the study of nucleosapsids for developing new therapeutic compounds and vaccines based on systems to block nucleocapsid proteins in order to inactivate the infective ability of retroviruses like HIV, which causes AIDS, and other viruses, which have had encouraging results in animal studies.

Retroviruses are involved in a wide variety of cancers and immune system disorders in both animals and humans. The first research studies on retroviral proteins revealed that all retroviruses contain a highly conservative sequence involved in forming the viral nucleocapsid, as well as other important functional properties of the retrovirus. The ability of the nucleocapsid proteins to join with nucleic acids, particularly the RNA that codes the viral genome, suggests that they play an important role in the retrovirus replication cycle.

The symposium opened yesterday, 18 September, with a keynote conference entitled Past successes and future challenges in targeting key players of HIV pathogenesis given by Dr. Françoise Barré Sinoussi, Nobel Laureate in Medicine in 2008 for her discovery of HIV and researcher at the Pasteur Institute in Paris.