Sleep, antimicrobial resistance and open science are some of the themes addressed by B·Debate 2018-2019 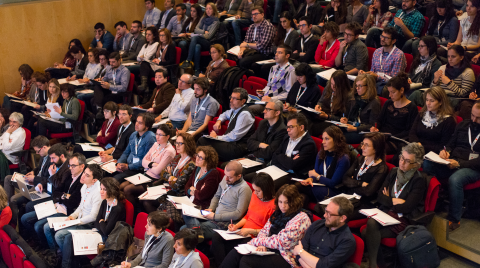 The importance of sleep for good health, advances in research on microbial resistance, and open science are some of the topics that will be discussed during B·Debate 2018-2019, an initiative by Biocatand “La Caixa" Foundation to drive high-level international scientific events to Barcelona.

These activities are estimated to bring together around 140 national and international speakers, experts in different disciplines of life sciences, and more than 1,000 attendees.

The upcoming B·Debate conferences will include topics such as sleep as the fourth and equally important pillar of health along with diet, physical activity and emotional well-being. The latest research has shown the importance of quality sleep in certain illnesses, as well as for personal and professional performance. The debate will discuss the latest developments in the field and seek to raise social awareness.

Another issue up for debate during 2018-19 will be the application of artificial intelligence and machine learning in biology and biomedicine, with a focus on organization, accessibility and mass data analysis, clustering and prediction techniques, and the latest development in cognitive computing and Knowledge Discovery.

Synthetic biology –a market estimated to reach a value of 38 million dollars by 2020– will provide another talking point, with a debate about the medical applications of gene editing, its transfer to the market and the ethical controversy surrounding it. In addition to the scientific debate, parallel activities such as informative film screenings and panel discussions will open up this controversial issue to the public.

Resistance to antimicrobial drugs, which complicates the treatment of infectious diseases and increases healthcare costs, will be another topic that will place Barcelona at the center of international scientific debate. At B·Debate, proteomics experts will discuss the latest advances in this field and its clinical applications, highlighting its potential for the development of personalized medicine.

Plant genomics is back on the agenda again this year at B·Debate. Experts will analyze the molecular interaction between plant defense against pathogens and its implications for food safety in the context of producing food to meet the demands of a growing world population.

As a new development this year, the program of activities will include a B·Debate to address transversal issues: Open Science and its potential for facilitating more effective research –reinforcing the idea of science as a public good, involving society– will be another topic up for debate.

The program is structured around proposals submitted to the B·Debate 2018 call, which this year exceeded all records with a total of 28 activity candidatures. The B·Debate Scientific Committee, formed by prestigious experts and scientists from various fields of science in Catalonia, was responsible for selecting the proposals that would eventually be integrated into the program.

B·Debate – International Center for Scientific Debate – Barcelona is a joint initiative launched in 2009 by Biocat and the “La Caixa” Foundation. Since then, B·Debate has organized more than 70 activities with 200 research centers, attracting more than 1,700 internationally renowned speakers, such as Valentí Fuster and Jane Goodall, among many others, and over 12,000 attendees. In 2016 alone, 200 speakers took part in B·Debate and there were 1,800 attendees.