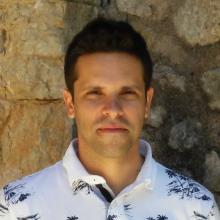 Joan Serrà is a research scientist with Telefónica R&D in Barcelona, Spain. He works on machine learning and artificial intelligence, and typically deals with sequential and/or sparse data. He obtained his MSc (2007) and PhD (2011) in Computer Science from Universitat Pompeu Fabra, Barcelona. During that time, he was also an adjunct professor with the Dept. of Information and Communication Technologies of the same university (2006-2011). He did his postdoc in Artificial Intelligence at IIIA-CSIC, the Artificial Intelligence Research Institute of the Spanish National Research Council in Bellaterra, Barcelona (2011-2015). He has had research stays at the Max Planck Institute for the Physics of Complex Systems in Dresden, Germany (2010), the Max Planck Institute for Computer Science in Saarbrücken, Germany (2011-2012), and visited Goldsmiths, University of London, United Kingdom (2012-2013). He has been involved in more than 10 research projects, funded by Spanish and European institutions, and co-authored over 80 publications, many of them highly-cited and in top-tier journals and conferences, in diverse scientific areas. He also regularly acts as peer reviewer for some of those and other publications.