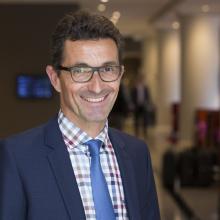 From 2016-2018 he was ‘Professor of Systems Biology in Nutrition and Health’ at the Liggins Institute, University of Auckland, New Zealand; and Chief Scientist of the NZ National Science Challenge on ‘High-Value Nutrition’. His research focus laid on early-life health and food innovation.

In February 2011, Martin joined the Nestlé Institute of Health Sciences (NIHS) on the campus of the Ecole Polytechnique Fédérale Lausanne (EPFL), Switzerland, as Head of the “Molecular Biomarkers Core”, which he has built from scratch. This core facility and program covered five platforms and teams, i.e. proteomics, metabonomics, lipidomics, micronutrient analysis and diagnostics. His team developed and conducted systems biology-oriented nutrition and health research in the context of healthy ageing with a focus on cognitive, metabolic and intestinal health.

In June 2009, Martin was appointed Honorary Professor for Nutritional Science at the Faculty of Science, Aarhus University, Denmark, an adjunct position which he still holds. From 2012 to 2016, he was Lecturer at the Faculty of Life Sciences, EPFL. From 2003 to 2011, Martin built and led the Functional Genomics Group at the Nestlé Research Centre, Lausanne, and was responsible for proteomics and genomics in nutrition.

Being educated and trained as an analytical biochemist, Martin has acquired research experience in the pharmaceutical, biotech start-up and nutritional industry. Martin holds a B.Sc. from the Univ. Aachen, Germany, and a M.Sc. from the Univ. Konstanz, Germany. He performed his doctoral research in Konstanz and at the University of California, San Francisco, USA. During his doctorate and post-doctorate, he specialised in mass spectrometry, proteomics and genomics.