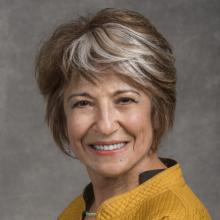 MINA J. BISSELL is Distinguished Scientist, the highest rank bestowed at Lawrence Berkeley National Laboratory (LBNL) and serves as Senior Advisor to the Laboratory Director on Biology. She is also Faculty of four Graduate Groups in UC Berkeley: Comparative Biochemistry, Endocrinology, Molecular Toxicology, and Bioengineering (UCSF/UCB joint program). Having challenged several established paradigms, Bissell is a pioneer in breast cancer research and her body of work has provided much impetus for the current recognition of the significant role that extracellular matrix (ECM) signaling and microenvironment play in gene expression regulation in both normal and malignant cells. Her laboratory developed novel 3D assays and techniques that demonstrate her signature phrase: after conception, “phenotype is dominant over genotype.”

Bissell earned her doctorate in microbiology and molecular genetics from Harvard Medical School, won an American Cancer Society fellowship for her postdoctoral studies, and soon after joined LBNL. She was the founding Director of the Cell and Molecular Biology Division and later the Associate Laboratory Director for all Life Sciences at Berkeley Lab where she recruited outstanding scientists and developed a strong program in cell and molecular biology and breast cancer.

Bissell has published more than 400 publications, received numerous honors and awards and is one of the most sought-after speakers in the field. She is not only an elected Fellow of most U.S. honorary scientific academies, but she also sits on many national and international scientific boards and continues to inspire, mentor and engage in full-time research, among other scientific activities.