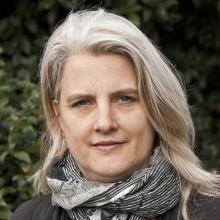 Saskia Hogenhout obtained her MSc in Biology at de Vrije University, Amsterdam, The Netherlands in 1994. She conducted her PhD research on the molecular basis of luteovirus-aphid interactions at Wageningen University and Research Centre, The Netherlands, and graduated in 1999. In the same year she became an independent Project Leader (Assistant Professor) at The Ohio State University (OSU), USA. Her group at OSU investigated leafhopper and planthopper transmission of phytoplasmas and rhabdoviruses. Saskia obtained tenure as Associate Professor in 2005. She moved her research group to the John Innes Centre, UK, in June 2007, and became Honorary Professor at the University of East Anglia, Norwich, UK, in 2013. She is currently a member of the Department of Crop Genetics at the John Innes Centre. Her research focuses on the molecular basis of plant-microbe-insect interactions, and includes research on how phytoplasma effectors modulate plant architecture and development, and plant resistance to leafhopper vectors. More recently, her research program also includes aphid functional genomics, functional analyses of aphid effectors and plant defense responses to aphids.