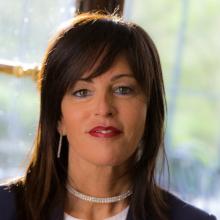 Professor Novello graduated in Medicine at the University of Turin, Italy in 1995. She then did a Postgraduate Course in Respiratory Medicine which she completed in 1999 summa cum laude. In 2006 she achieved a PhD in Human Oncology and went on doing a Postgraduate in Medical Oncology in 2010.
Professor Novello is presently Full Professor of Medical Oncology at the Department of Oncology at the University of Turin, Italy and Chief of the Thoracic Oncolgy Unit at the San Luigi Hospital in Orbassano-Italy.
Her previous positions include: Fellow at S. Luigi Hospital, Clinic of Respiratory Diseases, Orbassano, Turin, from 1995 to 1999 and Clinical Fellow at the same hospital, Thoracic Oncology DH, from 1999 to 2000. From 2000 to 2001 she was Resident A at the Institut Gustave Roussy, Villejuif, France. From 2001 to 2003, Research Fellow in the Medical Experimental and Clinical Sciences area at the Thoracic Oncology Division (University of Turin), and attending Physician at the Thoracic Oncology Division, from 2004 to 2010.
Professor Novello was also Thoracic Oncology Division tutor of Educational Classes in Thoracic Oncology and Educational Classes supported by AIPO (Hospital Pulmonologist Italian Association) for Specialised Doctors in Respiratory Diseases, Thoracic Surgery, Radiology, Radiotherapy and Medical Oncology.
Professor Novello is a Member of the American Society of Clinical Oncology (ASCO), Member of “Innovators in Lung Cancer”, Member of IASLC and Board of Director Member, Member of NLCP (National Lung Cancer Partnership) Scientific Committee, Member of IASLC Young Investigators Awards Scientific Committee, Board of Director of AIOM (Italian Association of Medical Oncology) and Board of Director Member and President of the European Association - Women Against Lung Cancer in Europe (WALCE).