One of the challenges of biotechnology and biomedical science is to be able to quickly and efficiently manage the massive volume of information generated. The information being generated in the omic sciences and the bioinformatics tools aren’t being applied as expected in the field of the life sciences to improve and advance in basic biomedical research. This lack of development of translational synergies between bioinformatics and medical informatics is down to many different causes. One of the possible reasons is the lack of scientific meetings that bring together specialists from both areas and allow them to share the challenges facing both disciplines and find ways to approach them together.

This was the main aim of the Beyond Omics Revolutions: Integrative Knowledge Management for Empowered Healthcare and Research debate workshops organized by B·Debate International Center for Scientific Debate Barcelona —an initiative of Biocat and the “la Caixa” Welfare Foundation— and Pompeu Fabra University (UPF), under the framework of the European INBIOMEDvision project. These sessions brought together more than twenty leading scientists in bioinformatics and medical informatics from benchmark research centers around the world.

Does this excellent participation mean that there is a collective interest in forging collaborations between the two disciplines?

Generally that happens in all fields, but in the specific area of this debate, yes, there is global interest in better linking up informatics that serves basic biomedical research, which is known as bioinformatics, with informatics that serves clinical research and healthcare, known as medical informatics or healthcare informatics. So far, there has been a wide gap between these two branches, each with its own methods and scientists, but increased connections would benefit everyone, researchers and society as a whole.

Finding links between these two disciplines was one of the key focal points of these sessions.

Yes, over these two days a central idea came out of the debates: the need to connect the huge amount of information being generated and be aware that linking up this information is a challenge that in many ways is similar to standardizing vocabulary, for example.

And why don’t we see this predisposition to find avenues to work together more often?

In the science arena we are fighting against two factors that are, at the same time, complementary. On one hand, the tendency towards specialization, as there is so much knowledge that in the end one must concentrate on a highly specific topic and know somewhat less about science in general. Plus, new disciplines are constantly popping up and existing ones, subdividing. And, on the other hand, if we want science to be as meaningful and useful as possible we must be able to connect the different areas of science so that we don’t end up with isolated islands that are not as useful as they could be.

Treating a disease is a multifactorial and multidisciplinary issue, meaning that neither a disease nor its treatment can be understood from one area of science alone because everyone is lacking knowledge. And the more specialized the scientist, the more knowledge they are missing in order to understand the global problem. This makes it more and more important to create social systems, like these debate sessions, or computational systems, like knowledge-management systems, to allow us to integrate the different pieces of knowledge and better understand them through this connection.

Are the different people and groups involved aware of this need for collaboration? To integrate the knowledge-generation systems?

Nowadays it wouldn’t be responsible, and sometimes we are irresponsible, to work on large projects to generate new biomedical data without thinking about a parallel data storage and analysis project. There are already projects working in this line, like the European Open PHACTS project that brings together companies and academic institutions, and on which we are one of the partners, that aims to make this automatic  connection of biomedical knowledge, researching the connection between different concepts computationally in the field of pharmaceutical research. This is the path we must follow because, for example, we are now working on individual genome sequencing projects, but we must also think about how this information will be stored and analyzed because if we sequence the genome of the entire population of Spain, right now there’s no informatics system capable of doing so.

So, would that work be useless?

Basically. We must strike a balance between the money invested in generating data and that invested in transforming it into information and into knowledge. Because unanalyzed data means nothing.

Should scientists be more practical? In the end, everyone aims to improve quality of life…

Yes, but we can't ask all scientists to be applied scientists. There will always be some interested in knowledge for the sake of knowledge. This is fine, but the issue is what percentage of science should be unguided and what percent should be geared towards resolving society’s problems.

We must start from the idea that all science that is funded must be of excellent quality. Now, in the current economic climate, we have to ask: what percentage can society spend on each type? It is a debate that must include scientists, of course, but also politicians and society as a whole. Obviously, there's no need to say that the focus of my research, and these debates, is applied science, serving society and general health, but I also believe that we must have biological research that is not geared towards solving any particular health problem.

And were the sessions fruitful? Did they produce any collaboration projects?

Yes, at GRIB we are working on a new project and this debate allowed us to contact American researchers that we have invited to participate. I can't explain the specifics of the project because were are preparing to present it to an international call for proposals in order to obtain funding and, although the project isn’t 100% defined, we have already established the main lines and now count on collaboration from our American colleagues.

But that’s not all. We are also working on a document to summarize the conclusions of the two days of debate in Barcelona because another aim of these sessions was to raise awareness of the ideas produced and for them to inspire institutions in their future projects. The specific topics of calls for proposals for European funding come out of these debates and scientists must act as a lobby so that this type of topics are included in these calls for proposals. 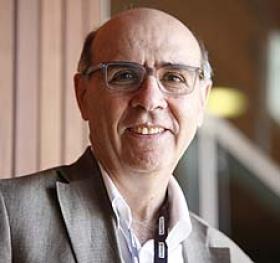 Dr. Ferran Sanz is head of the Pompeu Fabra University-IMIM GRIB and professor of Biostatistics and Informatics at the UPF. He is also on the Scientific Committee for the Innovative Medicines Initiative (IMI) and is the academic coordinator of the Spanish Technological Platform for Innovative Drugs. In July, he led the debate sessions "Beyond Omics Revolutions: Integrative Knowledge Management for Empowered Healthcare...