These debates help boost the international projection of Catalan research 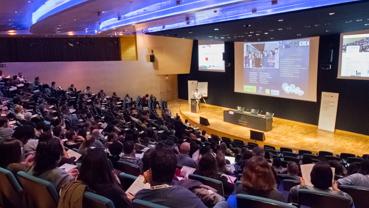 From 31 March to 21 June 2017, scientists working in the life sciences at research bodies in Catalonia may submit their proposals for the 2018 yearly program of B·Debate activities, an initiative of Biocat and the “la Caixa” Foundation. The call is open to ideas for groundbreaking, multidisciplinary, international scientific debates that also include additional transversal activities to support research and dissemination of the conclusions of the debate.

B·Debate is more than a scientific congress; it is a meeting place that promotes the exchange of knowledge and boosts the visibility of its scientific leader and promoting organizations in order to forge or strengthen collaborative ties and grow our research. After his experience coordinating the B·Debate series 'Barcelona Conference on Epigenetics and Cancer' (BCEC)’, Marcus Buschbeck of the Josep Carreras Leukemia Research Institute (IJC) explains that he has “strengthened his ties with benchmarks” in his field.

B·Debate both promotes research carried out in Catalonia internationally and creates new networks and synergies for personal exchange or joint projects. “Organizing a B·Debate session has led to researchers doing stays at other laboratories and submitting joint proposals to international congresses,” says Roser Nadal of the Institut de Neurociències (INc) –UAB and scientific leader of the B·Debate ‘Early Life Experiences. Vulnerability or Resilience?’ held in October 2016. For Miquel Àngel Pujana, of the Catalan Institute of Oncology (ICO) and scientific leader of the B·Debate ‘Cancer Therapeutic Resistance. Progress and Perspectives’, the results were so positive he’s doing it again in 2017 with ‘Women’s Cancer’. “Thanks to the B·Debate event, research groups at our center have established new collaborations and projects in Spain and abroad,” says Pujana.

Moreover, the results of the B·Debate sessions aren’t only in the academic arena. They also help the organizations gain press in the general media and with patients’ associations.

To submit a debate proposal, fill out the online application form by 21 June 2017. The B·Debate scientific committee will assess the scientific excellence of each proposal and, based on the established selection criteria, choose 8 to make up the 2018 program of debates. Both the potential scientific impact and social interest of the proposals will be taken into account.

Once the chosen proposals have been announced, the scientific leaders of each B·Debate will be able to focus on consolidating their session, as the B·Debate team will take care of most of the logistics and organization for the debate.